Today's post is going to be kind of boring.
I was looking forward to having some beautiful finished bunny slippers for you, but it turns out I'm a chicken. After some prompting from my boyfriend, I managed to get the ears sewn on this morning. 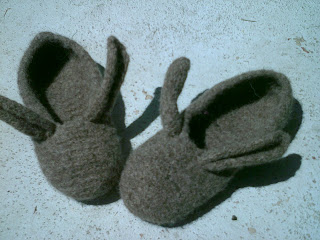 I even went so far as to get out some pink for the nose and some black for the eyes. I carefully sewed on the eyes and nose onto one bunny. I'm sorry I didn't take a picture of it. It was just so ugly, I pulled out the thread before thinking twice.
So now my bunny slippers are waiting for me to get brave.
I fear they will be faceless and tail-less for some time yet.
Did I tell you the tails are made of tiny pom poms? I hate pom poms.

In other news, my legwarmers are coming along. 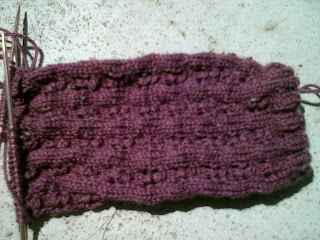 I'm using some Cleckheaton Country 8 Ply Naturals I inherited from another knitter. I have 6 balls of it in the stash. What you see above was done with almost an entire ball, so I think this project will leave me with two leftover. Which, hopefully, will be enough to make an Orchids and Fairy Lights.

Finally, I wanted to show you my new mini-needles in action. See those legwarmers up there? I almost didn't cast them on at all, because they use size 4 needles. And where oh were were my size four needles? Hexipuffing. I couldn't possibly steal those needles so I tore up the stash looking for something suitable for a hat or something. Finally, I sucked it up and realized that what I really wanted to work on was the legwarmers.
The fours came out of the hexipuffs.
Just then I remembered that I bought those mini-needles from Scotland!
So I switched out the needles and whipped up a few hexipuffs for good measure.
So before I show you the in-action picture, I wanted to  share my Hexipuff bag.

It seems like everyone is obsessed with finding the perfect hexipuff bag. But me? I just keep them in my purse. My purse has a middle section that zips closed, and in it I keep about 8 or 9 different colored mini-balls of sock wool. Then, I keep a little pencil case in the main section of my purse that has the hexipuff goodies. 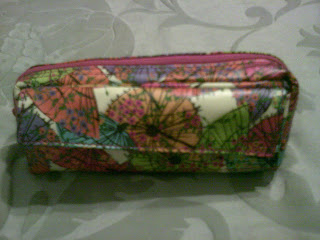 I bought the pencil case at Borders. (You know, back in the day when Borders existed?)
I used to use it for my DPNS before I started staying at home a lot and realized a little mug is much more convenient.
So now it contains fluff and HIPs(hexipuffs in progress). Check it out! 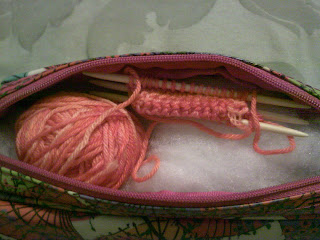 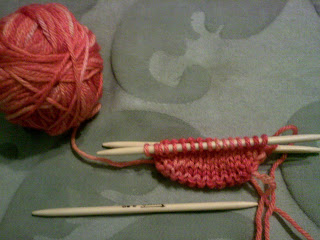 At first I was worried they would end up being too small, but nope! They are absolutely the perfect hexipuff needles. Well... Okay to be honest I'm not sure about that yet. I have to check the measurements of puffs made by these and puffs made by the metal needles. I'd like my puffs to be about the same size, ya know?
Anyways moving on, the pouch has a little velcro bit up front. 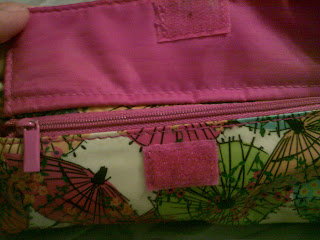 And that is where I keep my tapestry needle and my yarn cutter. 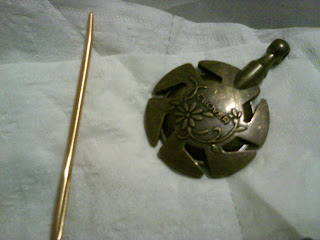 I have the needle because I graft them shut. A lot of people aren't grafting but I think kitchner is fun and it makes me feel clever. Plus doing it 400+ times means I'll probably never forget it.

And just for kicks, here's a picture of all my puffies together. 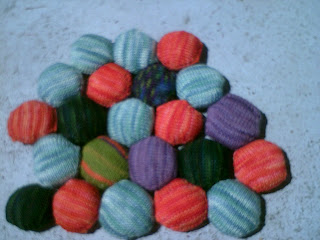 Actually, I'm missing one. Because I know I embroidered an ugly heart on one of the orange ones...
Oh well.
That's it for today. It's naptime ;)

Posted by grandmastatus at 12:58 PM