This year is really getting away from me. I started out the year with pretty big knitting ambitions. "KNIT ONE MILE EVERY MONTH!" "NO BUYING NEW YARN!" "KNIT A CHRISTMAS PRESENT EACH MONTH." Yeah right.
I did pretty good for the January- 2,059 yards.
Then February was only 1216 yards.
March was about 340 yards.
April was ZERO yards. (that's zero yards of finished object, not necessarily zero yards knitted)
And now here we are in May and I've finished two tiny hats and a garter stitch blanket.
Boring.

Still, I think it's important to note that I did actually complete the knitting of my mom's pullover. Well, ok that's a lie. I finished knitting all the pieces and started seaming it but haven't finished seaming and haven't started the neck ribbing.
I did, of course, cast on for a new sweater. Because apparently I have knitting ADD and I like to cast things aside as soon as they get to the boring bits.

The new sweater is Akiko by Yoko Hatta and this pattern is the first pattern I have purchased since 2015. I'm so excited about the finished object though. I think it will be the perfect thing to pull on while I'm at my computer. It's like a cardigan slash shrug and it just gives off this really cozy squishy vibe. I'm using the Miss Babs Yowza I got at Stitches West last year, and the color is a little bit too variegated for the pattern but I really really wanted to use this yarn up and I really really liked the pattern and it is coming out ok.

As far as my goal of buying no new yarn, I have done amazingly. I haven't purchased a thing. Not one wee mini-skein. Go me!

I promise I'll put up a photo of the new sweater in progress soon. And hopefully now that I've admitted that I need to finish seaming my mom's sweater I will finish that and post a picture of that too...

For June I have a small break from school (until June 18) and so I'm hoping I can finish the Akiko before school starts up again. If not finish it, at least get the cabled portions done. I'm almost halfway done with the left front, and I have not spent a ton of time on it. The next thing I want to cast on is a pair of striped socks for my brother. I made him a pair in 2012 and he finally admitted to me that he lost one of the socks. He said that they are his absolute favorite socks to wear though, and that he keeps the single sock in hopes that one day the missing one will turn up. Poor guy! I'm using some stash yarn from Joann that is a really soft nylon blend, I think. They will be brown and green which I know sounds really ugly. And they probably will be really ugly. But, hey, it's using up that stash yarn!

Another project I'm excited about is the Plum Blossom Tee by Andrea Sanchez. This pattern I won a few years ago, and I have always wanted to cast it on with this beautiful lilac/blue linen blend I got in a tiny yarn shop Patterson. Now that the weather is warming up, I think it will be the perfect knit for summer. And aside from the lace detail it is mostly a pretty plain project so it won't take a lot of focus.

Final little update: I've been listening to the Yarniacs podcast and I'm really enjoying it. Right now I work at UPS in the middle of the night and it is a pretty boring (although quite labor intensive) job. While I work, I get to listen to one headphone and after the music in my phone got old I started listening to audio books before finding some wonderful knitting podcasts. If you have any favorite podcasts that I should tune in to, let me know in the comments.

Posted by grandmastatus at 1:43 PM No comments:

The first thing I ever knitted was a misshapen square of garter stitch. Using my grandmother's old blue aluminum needles, I followed directions in my room alone to cast on and knit. The piece was never finished, as I didn't know how to bind off and didn't actually have the patience to learn. The stitches were wonky, tight in some places, holey in others. I had somehow increased several stitches along one side and it was wholly imperfect... I loved it.

I tacked the swatch to my wall, where it hung in its variegated Christmas colored acrylic glory and I cast on for my next project right away. I was 14 then, and had no idea what life had in store for me. Knitting-like scrapbooking, jewelry-making, writing and drawing- was another phase I was going through. Or so I thought.

Through my high school years I continued knitting: hats, sweaters, scarves decorated with aliens and initials. I knit through college. Through the births of two babies. Through thick and through thin. I moved my boxes (and boxes and boxes) of yarn and knitting books with me 10 times, and moved on from stumbling along with designers to modifying designs and then to inventing my own.

I look back now at that misshapen square of garter stitch (Yes, I still have it) and wonder if I had any idea. I know I didn't. Anymore than I knew that the boy I was dating wasn't The One and that I wouldn't be able to drink normally or that I would always regret not paying more attention to algebra. I had no idea that knitting would be my constant companion. Knitting would save my life. Knitting would keep my spirit alive, keep me awake during boring college lectures, provide me with entertainment during social engagements, give me "free" presents when I was low on cash and even providing me with cash for my skills with the needles.

Sometimes I'm working on a sweater front and I'll smooth it out on my lap, admire its neat stitching, check that everything is in order, and then hold it up to myself. A practice in visualization, I can imagine every detail in the finished object. How wearing it will make me look sophisticated, or cozy, or sharp, or like a model leaning just so. It's a kind of magic that, as I pick up the work and continue on, keeps me going through the long torso, stitch by stitch.

That's the thing about knitting that I really love- or one of them anyway. Every thing you create is just made one stitch at a time. It's sort of like a metaphor for life. One day at a time, you follow the same steps and some day it is complete and, like my first object perhaps there are mistakes. Perhaps there are holes or it is misshapen or it ended abruptly but it is something you made and you should be proud.
Posted by grandmastatus at 3:40 PM No comments: 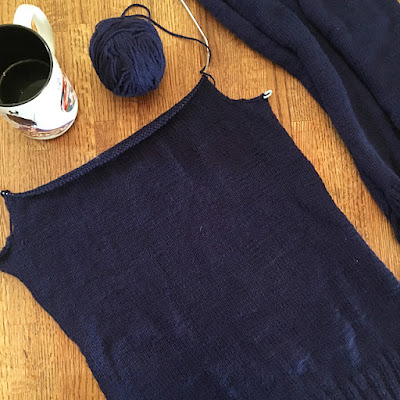 I've been working on some things. There is a sweater I've started for my mom's Christmas present which is all done except the front. It's made with acrylic yarn leftover from the sweater I made my husband a few years ago. (Which he doesn't ever wear. Not that I'm bitter except I totally am because it's super soft and I would wear the heck out of it if it wasn't big enough for three of me but I digress.)

I still haven't finished my Norwegian mittens. It turns out that though I love the way the design is turning out, it makes me sort of anxious to think about knitting on those tiny little needles. I've been working at UPS for 6 months and my fingers are basically a constant state of peeling/blistering from wearing gloves and handling packages and pushing buttons etc. Hopefully I'll get another job soon and I can start getting back to small needles again.

As it is, I've joined a knitting group at my local library which knits for charity. It's a fantastic way to knit up scraps. Which I need to do. Because I may have entered a bet with my husband and my son. They are both betting that I can NOT go the entire year without buying any yarn. So far, I haven't. But I did buy a lot of knitting books second hand... but those don't count! I ONLY SAID YARN! Also they don't know about the knitting books because once they are added to my giant bookshelf they blend in with the tons of other knitting books I already have so... plus one for me. Part of me recognizes that technically the same thing would happen if I bought yarn because they have absolutely no idea what yarn I have already, but the spirit of competition would be lost if they did in fact win. Even if they weren't aware that they did.

So the charity knits. I cast on a garter stitch blanket for the local hospital. Again, acrylic. 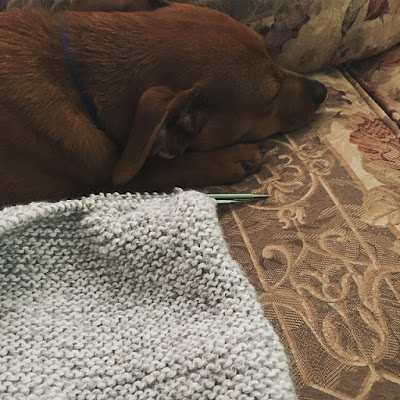 Modeled happily by my handsome poocher, who I adore. Feel free to also adore him but be aware he will bark at you.

And then I picked up some old I Love This Cotton from my Hobby Lobby days and worked up a few little hats. 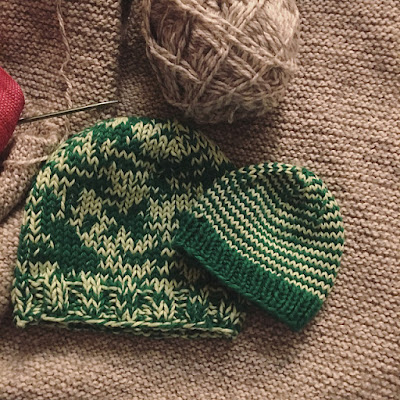 It's been really nice having those hours at the knitting group to get some reliable knitting time in every week. My mom is amazing and has been watching my kids, including picking up my son from school just so that I can knit with these ladies. I am the youngest in the group, but I don't see much difference between any of us at all! Well, except how most of them are retired which I am frankly just jealous about!

I've taken this huge long hiatus from blogging and normally I would probably say that it has to do with school or work or how I'm so busy, and it's true that I have been so busy. But it's more than that. I suffer from seasonal depression. And regular depression too I guess. I finally went to see a counselor and was prescribed medication and it is like night and day. I feel like I have a reason to live again, and so maybe I will have a reason to blog too. Perhaps there will be more of me around here. It certainly seems like there is more of me in general. I always worried about taking antidepressants because I thought it would change who I am? Does that make sense? Well, it turns out that what was changing who I am was having depression and constantly thinking negative thoughts and crying at work and just being generally miserable. With these pills I can smile again. I can focus on my kids. I can get a B on a test and not have a complete meltdown because I'm able to look at the big picture and see that it doesn't matter all that much in the long run. (I know. Crazy!!!) In the last few months I have crawled out of my shell and met people in my town. I have opened up and made friends at school and at work. I have started taking my kids out to the park, to the zoo, and to the library. I manage to get most things done...mostly. And it's OKAY. It's amazing for me, although it may not sound like much to anyone who has never suffered with depression.

So, anyway. This is me, saying hello again to you beautiful people. 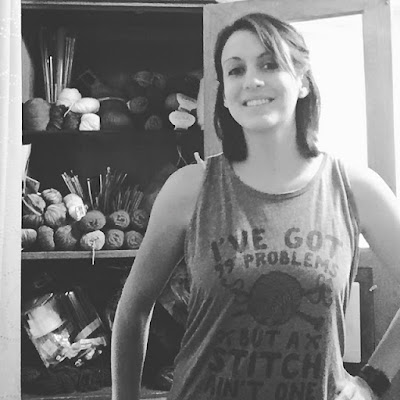 Posted by grandmastatus at 4:35 PM No comments: