Oh did I forget to mention the yarn in my closet? 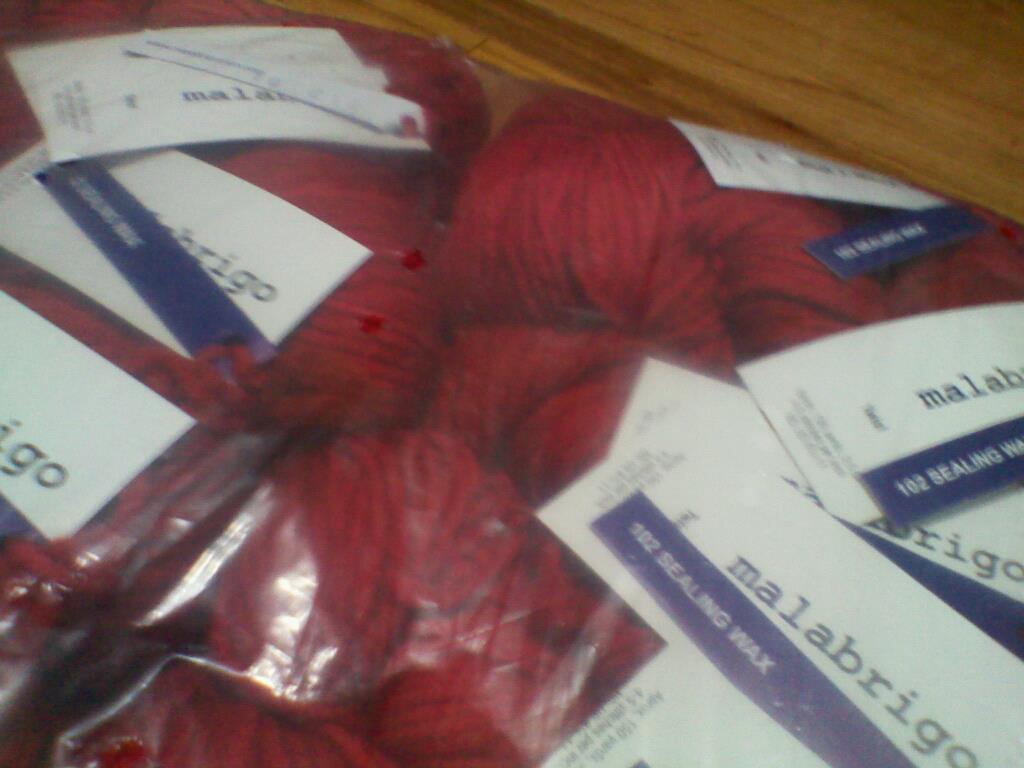 10 skeins of Malabrigo Twist (colorway Sealing Wax) have been calling out to be turned into the Revere House Cardigan. I'm finishing up a simple self-designed (by that I mean I'm just knitting and then holding it up to my body) vest and it is next in line!
Posted by grandmastatus at 4:48 PM 2 comments: 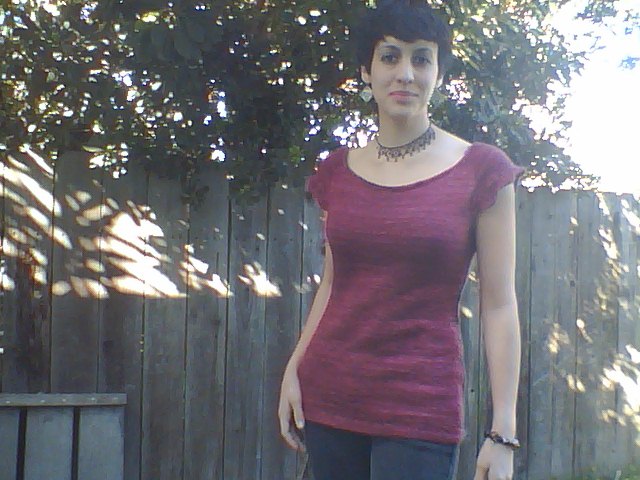 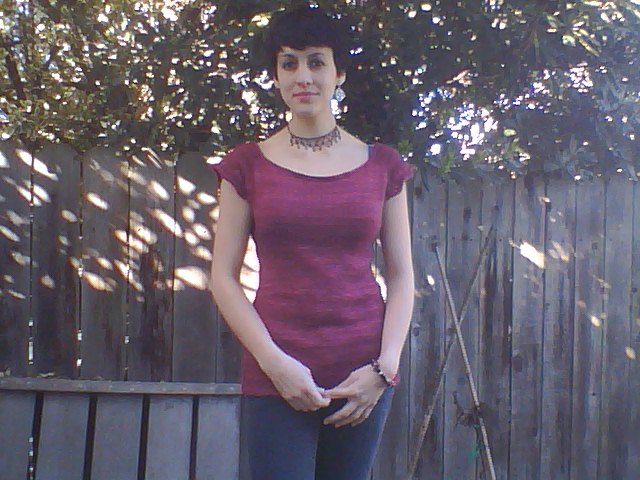 Modifications:
This was such a fun and easy knit! I was really in the mood to just work from a pattern, not think about maths, and turn off my brain. This pattern really did the trick. The little lacy portion in the sleeves was a fun little distraction from the raglan increases, and after the body (which did seem to go on a little bit long towards the end) I was pleased that I didn't have to go back and knit more on the sleeves.

This is the first short sleeved top I've ever made, so that was kind of new and fun. It also means I have a lot of yarn left over, because I almost always buy a sweater's quantity. I'm thinking of making the Summer Flies shawl with the rest.

The only thing I don't really like about this top is the way the back neck droops. I thought my blocking would help it out, but it didn't do much. Here's an unflattering picture to show what I mean. 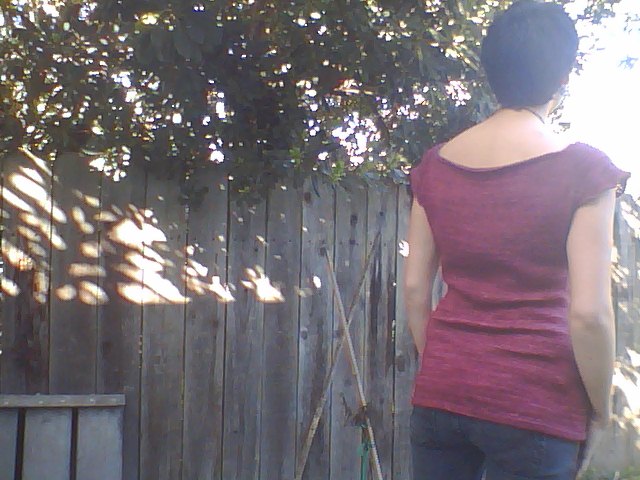 But, slight droop aside, it is a very beautiful knit and I know I will be wearing it a LOT. The Anzula Cricket was such a pleasure to knit with and it feels wonderful on my bare skin. (I'm one of those people who thinks wool is itchy. I love to knit with it, but if I wear it I usually put on a long sleeve shirt underneath.) I adore the color ("Madam" was the name of the colorway) and all in all I'm very happy with how fast this knit up. 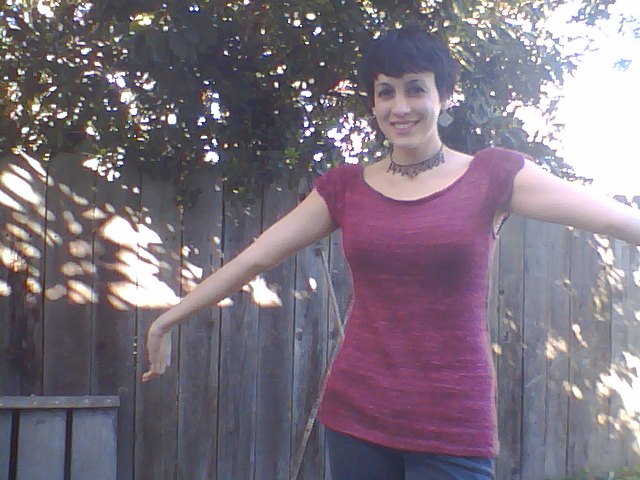 So it's working out!
A little bit of knitting here and there, at work and at home and I finally have some progress to share with you all! 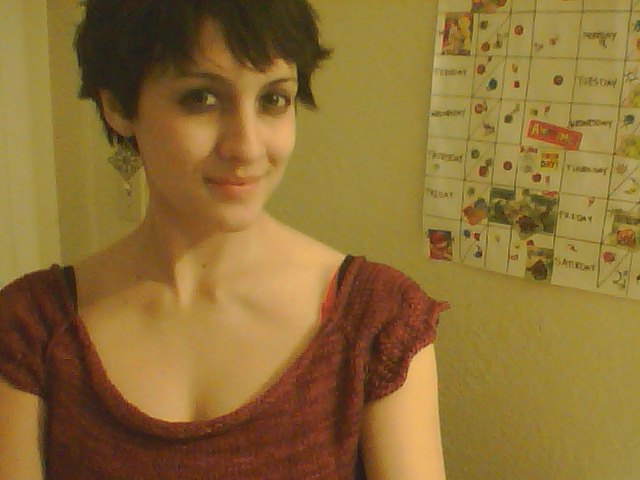 It's not, but when I tried it on I really didn't want to take it off. Truly, my photos don't do it justice. But as much as I love it and wish it were done, it's not. 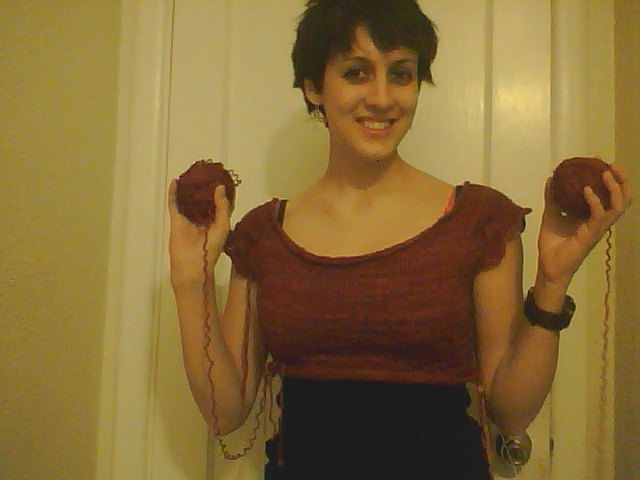 Quite a bit more to go, as you can see. 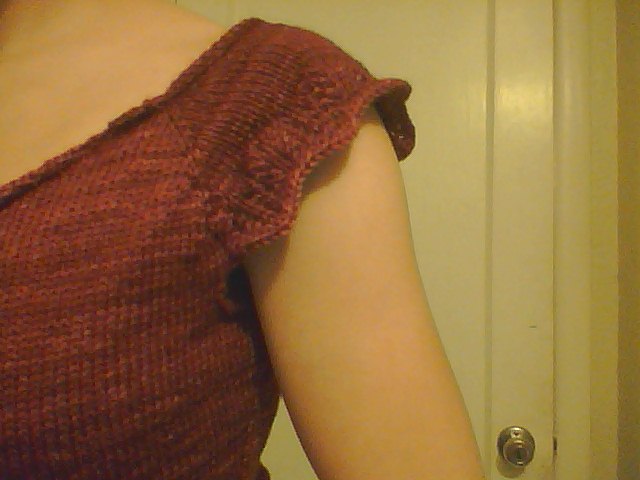 But isn't it dang cute!?

I'm working with 2 skeins, thanks to the different dyelots. And I'm working my old swatch into it, which is why my yarn is kinky. Yes, I realize I could have de-kinked it by washing it but I honestly don't care. It is a little bit uneven there, but I think after it's been washed a few times it will work itself out. And like I said, I don't really care. I just can't wait until all the ends are weaved in and it's time to wear it outside in the sun!
Project page here.

Decided to join up with Tamis again today <3
Posted by grandmastatus at 7:16 PM 22 comments:

Apologies for the lack of pictures: you'll find out why in a moment.

So yesterday morning I cast on for the medium size for the Spring Garden Tee, worked all the neckline shaping, joined the piece into the round and knit all of the raglan increases.

And then.
I realized I had joined into the round without checking if there was a twist.

This was the last straw in a string of difficulties involving: My printer refusing to agree that my computer was on, My mom's computer refusing to allow "Dangerous pop-ups" like the pattern I was trying to download from an email I had emailed to myself (I ended up knitting straight off my computer screen), TWO DIFFERENT DYELOTS (I failed to mention that yesterday, but that's why the swatch starts light and ends dark. The middle stripey bit was my attempt to combine them) and miscounting stitches between markers.

So I frogged the whole thing, threw it in my purse, went to work and ignored it entirely.

Ok that's not true. I decided to have a re-do at my first break. I started the cast on and only had enough yarn for 96 stitches (instead of 100). I was like, "PSH a few stitches I care not!" and worked them with every last scrap of tail. (Usually I leave a substantial tail to weave in) I knit half a row before I realized that it was pointless. That little tuft of yarn sticking out was always going to be on the right side and it would always bother me. So I pulled that out too.

Got home at 9:15. The little one was asleep.
I crept onto the bed and started re-working the cast on, happily looking forward to a nice big knit.
And then he POPPED right up and said, "I'm hungry."
WHAT?
It turns out he had taken an incredibly late nap and there was no knitting to be had.

So you might be like, Dang this is just a long story of crap.
BUT the point, and the reason I even mention it here is that I woke up this morning, turned on my computer and immediately heard the printer rear up.

Pattern now in hand, I'm ready for the day.
Posted by grandmastatus at 8:38 AM 3 comments: