A quick project or two

I've been dying to try Madelinetosh yarns for, well, pretty much ever. So when we went to a little yarn shop in the bay area, I asked my husband to pick out a color he likes for a hat. I picked Tosh DK, and the colorway he picked was called "Pecan Hull." We perused patterns together and he chose Antler, a free pattern by tincanknits. 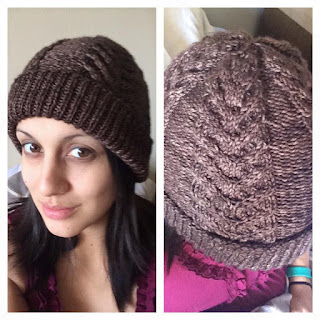 This pattern was very easy to knit, fun but not too complex, good and portable, and I think it came out really nicely. I did, however, skip the very last repeat when I tried it on his head and it seemed like it was going to be too long. I also doubled up the brim.
The yarn... I have to say I was expecting more from this company. I've just heard SOOOO many good amazing things about it, and I don't feel like it really performed as nicely as it could have. For instance, I crossed a cable incorrectly and I had to drop the stitches to fix that section and the yarn just looked shaggier afterwards. It tried to fray a little bit, and I'm just like, seriously? You're expensive yarn! How can you not endure one simple little frogging of less than 5 rows? But it feels nice and smooshy and it smells good, so... I won't NOT knit with it ever again, but it just wasn't exactly the amazing yarn I was hoping for.

So after I finished my husband's hat (I still don't have a picture of him wearing it unfortunately) I was deciding what WIP to finish next when my son suddenly dropped a request on me. Now, my son loves the fact that I can knit for the sole reason that it means I can create toys for him on a whim in less than a day. He has never asked me for a garment, a hat, a scarf, anything wearable: only toys. So imagine my shock when he says that he wants mittens to wear in the morning at school because his hands get cold. I cast on immediately. (Sorry Penelope- I WANT to finish your coat, but what's the point when you're still hanging out in my tummy anyways and Vyvyan has cold hands!?) 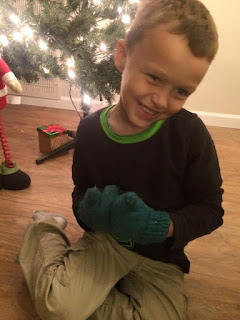 He was thrilled with them. He wore them to school (and didn't lose them, I might add- an amazing feat considering he's 5) and even asked for a matching hat! The pattern is a basic kids mitten pattern, available for free. It was an easy pattern to follow, and they are really a great fit. I used the 4-6 size. I shared this picture on Facebook and my cousin asked if he could have a pair too. He sells handcrafted candles at Apple Hill-basically a big Christmas craft fair- and it gets very cold out there. I'll have to make him a pair asap, because I'm sure he will trade me for a homemade candle and his candles smell GREAT! The yarn is wool-ease, just acrylic and wool. Soft and easy care, perfect for a little one's hands. Now I'm working on his hat- just a basic stockinette beanie out of the matching yarn. After that, I should really get to finishing Penelope's coat. I just don't have any buttons yet, and for some reason rather than finishing knitting the second sleeve and then dealing with the fact that I don't have buttons I just stuffed the whole thing in a bag. I mean, ok we also moved into a new apartment and maybe I don't exactly know where it is. And not to mention I'm 38 weeks pregnant and I just don't feel like digging around tight spaces looking for it. But after the hat, I'll look for the coat and finish it!
Posted by grandmastatus at 4:36 PM 3 comments: