Down a Rabbit Hole of a Different Kind....

This morning I got hooked into something new.

Turns out, a fellow TOK knitter is trying out the Alice in Wonderland gauntlets. I love the mitts, but have them stored in an entirely different section of my TOK pattern folder, labeled "CROCHET." I cannot crochet. I do not crochet. I will not crochet. 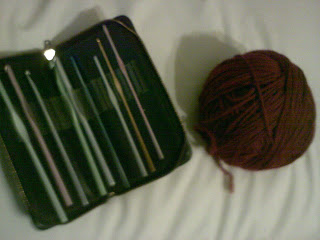 So I ask her if she was a beginner crocheter before she tried them, and it turns out she totally was! The only thing she'd ever done before was a chain for a provisional cast on. And so, I was inspired. If she could do it, so could I.


Then I took up my hook (it took forever to find it- thankfully it was in the right size) and a ball of leftover Cascade 220 from my CPH, and sat at the kitchen table with the pattern. I chained 20, I single crocheted one row and joined it into a round with what I hoped was a correct "slip stitch." Then I stared at the instructions. What the hell does ch 2 mean? What is a dc? I know it means double crochet, but what the hell does THAT mean? And with that I remembered my problems with Crochet. Because why do they call it half-double crochet? Isn't half of double just one? And what is double-triple? Why can't they just call it 6 crochet? And how am I supposed to know where the stitches are!???

So, I grumbled and put the red wool aside and took out some cotton. "If I'm going to have to practice something, I might as well get a washcloth out of it," is what I was muttering to myself.

I watched this video on youtube, and that helped me a lot. There was a second video as well, but it wasn't nearly as helpful because it went way too fast for me.

Then, working on my 20 stitch 20 row washcloth, I went to a secondhand bookstore nearby hoping I might luck out and find The Happy Hooker by Debbie Stoller. (I have this idea in my head that since I learned to knit with Debbie, I should learn to crochet with her, too)
I didn't find it.
I did, however, find one crochet book and figured it would be good to own and I could look for Happy Hooker at the library. Which didn't open until 1. Which didn't have The Happy Hooker anyways. Which, actually, didn't have a single crochet book at all. (Which I would have known if I had ever cared about crochet before today.)
Anyways, that means I did a lot of my learning from this book:
This book was written in 2004 and, contrary to the claims on the cover, the projects are not "hot." Like at all. But it was better than nothing and I worked really hard all morning getting the basic stitches down in my ugly dishcloth yarn.

Double crochet was really challenging for me. I had done single crochet before (actually I hadn't- everything I was doing was wrong, but I thought I had and I think that makes a difference.) but I had never attempted double. You might look at the swatch above and think aww that ain't that bad, Cecilia, you just need to practice! Yeah. Check it. 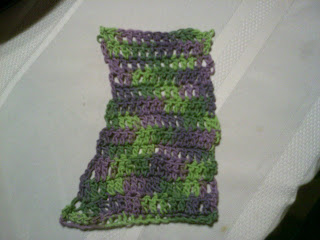 Yeah.
I don't know what the hell either.
I think at first I was doing like a three-quarter-half-quadruple stitch or something. Also, I may have lost a few stitches there. Erm. Maybe.

Anyway after that I was pretty sick of the cotton and wanted to get started on my project. I had learned a lot and thought maybe I could do an okay job even with the weird abbreviations in the pattern. Oh, in case you're wondering the yarn is Araucania Ulmo Multy that's been sitting in my stash since I bought it at Tuesday Morning for like $2.99 before I realized I don't really like knitting with cotton. Turns out crocheting with cotton isn't all that much better...

So I picked up my Cascade 220 and hooked up a mitt. Hear that? A whole freakin' mitt! One thing's for sure, crocheting is fast! And you know I was making mistakes left and right. But it was still done really really quickly. 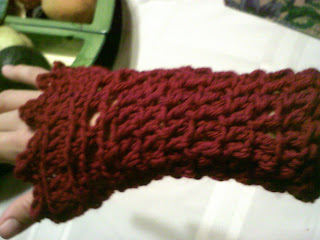 No, it's not perfect. But it's my first ever crochet project and I'm pretty happy with it. 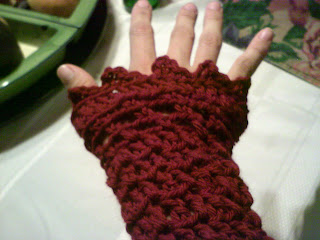 Now I just have to make the other....
Which is going to suck because now that I've made one and have a better idea of what I'm doing, I think the second one is going to come out noticeably better. 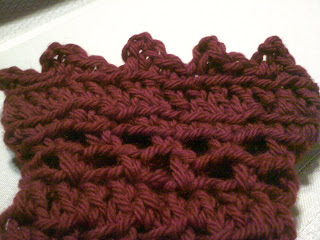 I was especially bad at joining into a round.
BUT
With my newfound skills, I think I'm going to whip up a baby hat real fast.
What's that? Why am I making a baby hat? One of my best friends finally went into labor this morning and had her little boy at 3:30 pm. And I'm pretty sure Henry's head is chilly.
Posted by grandmastatus at 6:16 PM