Yes, I am actually still working on the Central Park Hoodie. After weeks and weeks of taking it out to work one or two rows I've finally dragged it out and finished the hood. It's so pointy- I feel  like red riding hood. :)
Now for some pictures...

*The Guitar Man socks are making me crazy angry, because they're taking forEVER and I hate them. A lot. I'm not going to speak more of this. It doesn't help that I'm not sure of the recipient's foot size.*

Also I found my charger for the digital camera so that means....LESS BLURRY PICTURES FROM HERE ON OUT!!! Yay!

Things in the queue:
1) Baby Sock Monkey for Vincent's Xmas
2) Tadpole Socks with new Crock O Dye (gonna have to take a pic of that, it's beautiful )
3) Garter Stitch Scarf
4) Slytherin Sweater (to be pushed back for a while due to xmas knitting and me not being so selfish)
5) Monkey Socks
6) The you-know-what socks for you-know-who (even secret-er than the super secret sweater)
7) convertible mittens- not sure i can decipher the pattern but I'm willing to give it a shot
8) Snail spiral hat - NOT using sheepsdown because I want to be resourseful and use what I have
9) and so much more!!!!

Have I gotten myself into something....

I have set myself up for failure this year. Other resolutions aside, my knitting goals are damn near impossible. Nevermind that I expect myself to get through half of the twelve steps, nevermind the fact that I expect to get 2 and 1/2 hours of excercise per week, nevermind passing scool: how am I supposed to knit 12 pairs of socks in one year?!

Don't you dare suggest incrementalizing. I know 12 pairs in one year is just one pair a month and that 12 pairs a month is one sock every 2 weeks. But do you remember the socks I made for Carla? I was going to give them to her at the end of May but they weren't done until December. That's not bad, you think. It was December three years later.

I comfort myself with the knowledge that those socks were knee-highs, they were mind-numbing stockinette and I have made enough socks by now that I can end the toe without a pattern. It is no comfort. 12 pairs.... What really sucks is that I already missed Januaruy. But at least February's socks are done! 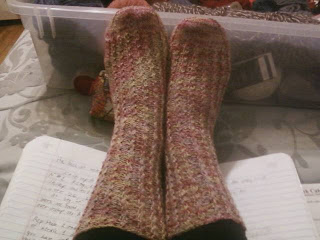 So as if the 12 pairs of socks thing wasn't freaking me out enough, I've also made plans to knit one Christmas present per month so I don't go insane knitting for people in December. Luckily, some of these can, and will, be socks. Unfortunately a lot of my sock yarn is non-machine washable and most of my family is lazy, so not all if the socks I knit will be gifted. There are quite a few gifts I have decided on that can be whipped up fron stash yarn, but I'm afraid i am going to have to buy more yarn sooner rather than later... Remember that yarn fast I'm on? Plus I decided to make 3 sweaters in 2011 and while I've gotten quite a bit done on my CPH
I still haven't touched it in more than two weeks.

So, anyway, I'm having a minor freakout.
Posted by grandmastatus at 4:20 PM No comments:


Posted by grandmastatus at 7:45 AM No comments:

Today is the Day


Knitting news:
I started a pair of socks for my mom's Christmas present! I know, it's February right? But one thing's for sure I'll be prepared.
I decided I'm going to give the mittens as a Christmas present as well, so I'll have 12 done by December if I knit one present a month. I only have about 21 presents to give and that's including EVERYBODY I know, pretty much, so I think next christmas ought to be a good one. :)

That's pretty much it.
Posted by grandmastatus at 7:35 AM No comments:

Today is not going very well.
Chunky is being extra bad: he's opening cabinets, eating magnets, and he even pulled down an orchid! So I put him on mini-time out and gave him a frowny face, but it didn't stop him from being bad. Finally he took a nap on my lap but the second I put him down he woke up and screamed.

I have homework to do, like a ton. I have to write an essay, do a collage about stereotypes, and do a bunch of math problems. Like I can weild scissors, write an essay and graph ineuqualities while the chunky's trying to dig in the garbage can. On top of this, the printer isn't working.

This is like the only day I have to work on this stupid collage and I can't get anything done! I'm just so stressed out right now and nobody wants to hear me complain so I might as well complain to you, blogggity blog blog....

Knitting news:
I cast on for the 2nd cupcake hat and got 5 inches into it before I decided the gauge was too loose and I had to frog it.
I picked up the stitches for the 2nd mitten and got a few inches done. Then I had to tear back to fix a mistake.
CPH is still on the needles: I have to do the hood and stuff but it's so large and cumbersome now.


I've started knitting the Smitten Holiday Garland for next christmas. I have 5 mittens so far, but for some reason 2 have come out much larger than the first 3.... I don't think I'm going to try to fix it. I think I'll just let it be.
PICTURES>>>>>


And that's about it for my life.
I wish my printer would work so I could finish this stupid project.

We had to pick a stereotype and do a collage with our face and then things that represent certain aspects of the stereotype. So we're basically putting one aspect of ourselves, to the extreme, on paper. I chose "knitter." I know that's not a stereotype, you don't have to tell me. But the teacher used it multiple times as an example, probably because I happened to be sitting there knitting in class. If you're "the person that's always knitting" then that's unfortunately going to be your stereotype.

So I have images that represent the following "knitterly" traits: smart, patient, nice, old lady, thrifty, old-fashioned, cat lady, creative, and so on.
And so each thing has to have an image that we add to the collage.
It's just really stupid though because.....like what if there are contradictions within the stereotype. For example, people think knitters are smart. Somehow, even though knitting is the simplest thing in the world and you don't even have to know how to read to do it, people think knittings means you're clever. Yet at the same time, people think knitting is stupid because you can buy socks for $2 at walmart.

Also, how am I supposed to portray "patient" as an image? That's one thing people always say "Wow, I could never do that, I don't have the patience." I just smile and keep knitting because I'm too impatient to explain to them that the reason I have to knit in the first place is that I'm too impatient to just sit and wait for class to start.

Still stressed out. So much for blogging helping me. School tomorrow. Waste of a day today.

Oh, also? Pocket has a tumor. It's about the size of a walnut. Going to the vet on Friday, but I don't know how much it will be to remove it. I had to call 4 different vets before I found one that sees rats!
Posted by grandmastatus at 4:21 PM No comments: