two things that are done and one thing that is not done.

A scarf is finally set aside for Christmas.
It is made with a tweedy Vanna's Choice, which turned out to shed more than I'd ever expected. The pattern is the one row handspun scarf by Stephanie Pearl Mc Phee, which looks very lovely. However, that one row does get a little bit boring by the time you're at the end. It may be a teeny bit short, but it's taller than me and that's usually what I go by.

Also finished are my lovely Vanilla Frappe Gloves. The pattern can be found here. They were so easy to make and they look so great; my only complaint is that I should have used nicer yarn. But, I'll probably make another pair. :) 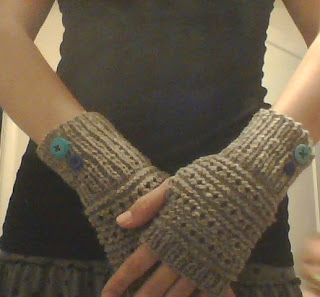 And then there's the dreaded fact...I totally have two legs.

(to perform such a feat.
twice.
o long legged spider.)
Posted by grandmastatus at 10:49 PM