I can't even words. 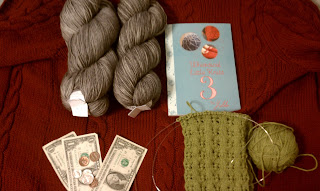 Yarn I bought:
I have a thing for HUGE skeins of yarn; these boast 560 yards each. This might become the Merryall Cardigan.* In spite of having noticed that I gravitate toward neutrals, having nothing bright or colorful in my stash, and completely intending to remedy that situation, I once again bought a "boring" color.
I did fully intend to make up for this by buying another skein, something bright from Anzula. I had my eye on Cricket, which- along with the wonderful colorways found in all of their yarns- was super incredibly wonderfully squishy. Instead, I ended up buying a book I've had my eye on for a while.

*OMG after I wrote this entry I went and saw Susan B. Anderson's most recent update and now I totally want to knit the Calligraphy Cardigan instead. But it calls for 1350 yards and I have 1120 and.... I seriously think that I would buy a 3rd ball just to have that cardigan. Is that completely insane? I mean, I would have like 330 yards left, which is totally like a full skein. It's not insane. Is it?

Book I bought:
Yes I fan-girled and got Ysolda to sign it.
Aside from wanting to knit the Not-So-Tiny Slippers for ages, loving Ysolda's designs and needing something for her to sign, I also bought the book for these WONDERFUL Narwhal mittens. Did you know they were lined? I didn't. When I saw the sample knit I just had to have the pattern. Narwhals on their own are pretty rad, but inside of these sport-weight colorwork mittens, there are fingering weight mittens. Lined= super squishy and super warm! Which.... I didn't think about it until hours and hours later but I totally live in California. Whatever. Still makin' 'em.

I think the most fun about stitches was seeing all the wonderful hand-knits everyone was wearing. I saw some amazing patterns, some I recognized and some I made a note to look into. It was such a blast.

What I was knitting:

I had lots of time to knit in the car, and we had a mid-day knitting break as well so I did manage a few repeats. Really, though, the conversation was so engaging that I ended up messing up the pattern and having to tink back a row or two. So not as much knitting as to be expected, but the first legwarmer should be finished by tonight.

Money I have left:
I'm just so glad I brought along only the amount I was allowed to spend and not a penny more.
The only thing I regret is that I forgot to bring chapstick. (Seriously. If you saw me at Stitches, I was probably rummaging through my purse for chapstick.)

I didn't take any pictures there- it's a phone battery conservation issue- but the group I was with will have pictures up soon and I'll be sure to linky and perhaps steal a few. ^_^

So much fun.
Seriously.
If you get the chance, go to Stitches.
Posted by grandmastatus at 10:26 AM

Email ThisBlogThis!Share to TwitterShare to FacebookShare to Pinterest
Labels: stash