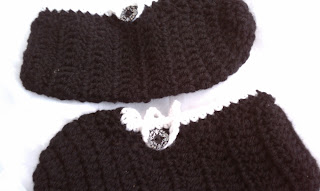 The two pairs basically look identical (the second pair has one extra row) but here they are together just as proof.
These were done with Lion Brand Wool Ease for ease of care. I used up the last of my cutesy La Mode buttons, but I think I might yet make more of these slippers and will want to pick up some more cute buttons the next time I hit up a craft store. I saw some that were shaped like hippos and can't help but notice there is some coordinating purple wool in my stash...

3. Owl Hat for Vyvyan
I knit my son hats. I think to date I have made him 7 hats. He has worn none of them. Not even the one made out of Cashsoft DK. I specifically fondled EVERY skein of yarn in that shop to find the softest thing I could afford that I could knit up into a hat for his precious little head. I designed the pattern specifically for him and the kid has done nothing but pry it off his head every time I put it on him.
He does have a hat that he wears. It looks like this: 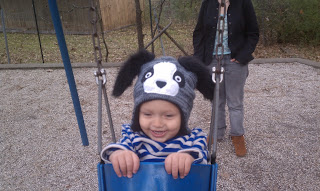 His dad bought it for him at Target and every time we get ready to go for a walk, Vyvyan wanders around the house calling, "Dog hat! Where are you?"
I know. Why mess with a good thing? But the kid loves owls and I love creating. Enter a quick and free crochet pattern and some stash yarn in the exact colorways needed: 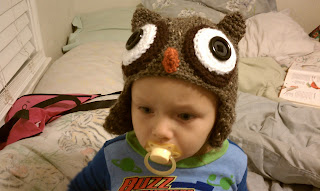 I realize he doesn't look very excited about his hat. That's because he's watching an engaging episode of Thomas the Tank Engine at the moment, and something serious is happening. (Something serious is always happening on Sir Topham Hatt's railway. Man should be out of business.) But yeah once he realized that it was an owl hat, he became very interested in my project. Once the eyes and beak were sewn on, minus buttons, he put it on and refused to take it off. I had to wait until he went to sleep to sew the buttons on! The next morning he carried around both hats lovingly, saying "Dog hat. Owl hat." And eventually getting frustrated, presumably because he couldn't wear them both at the same time. But we'll see if he continues to favor the dog hat. It does, after all, have a felt lining...


4. Owl Hat for Me
The disaster did have a happy ending after all. It involved frogging the whole thing, but sometimes I feel like that's good for the soul. Like a phoenix, maybe? 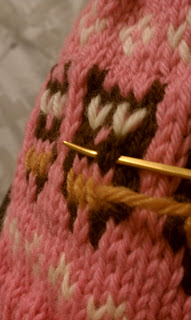 After re-knitting the whole hat and then adding in all the details with duplicate stitch, I felt like I had a right to be proud.
5. Cecil the Computer Monster
I don't know why Cecil languished in the closet as long as he did. (I cast on January 30th) When I pulled his project bag out and dumped him out on my bed, prepared for a long few hours of finishing work, I was startled to see that he was very nearly finished. Except for his legs, he was complete. So less than 10 minutes later, I had an FO.
I think part of the reason Cecil languished is that I wasn't sure why I was making him. I learned no new techniques and the stash yarn I was using took up much less space as 2 skeins than as a huge monster. Plus I had difficulty with the stuffing I used; it kept bunching up and looking bizarre. I think I stuffed him like 8 times before I eventually just gave up and let him be lumpy. But once I remembered I have a nephew turning 7, it all came together, and he'll be a welcome gift come March 10.

That's it for me.


In other news, tomorrow I am headed to Stitches West and I am so excited I think I might pop. Just completely explode. I may have dug out all the change I've been squirreling away in order to buy a few special skeins.