Hanging around the house...

So I'm still sick, and it turns out Vyvyan has an ear infection. He's pretty miserable. 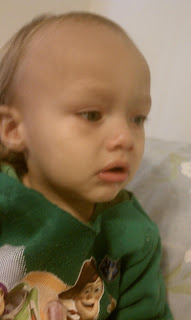 But if there is a good thing about him being sick, it is that he is suddenly willing to snuggle up under the blankets. So we've been keeping pretty cozy: reading Cat in the Hat, coloring, eating soup, and taking naps. Throughout this, I have been working on something fun. 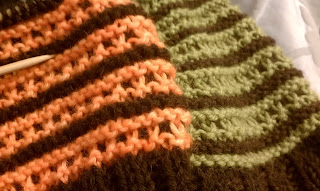 That's right: I'm making another Windowpane Hat, and this time I am going to take better notes. I am definitely the kind of knitter who fudges a lot of things as I go, and so writing down a pattern afterwards can be challenging. So far I have only made one change (the first row of contrasting color, because that solo stripe was bothering me) but I'm really going to modify the way I worked the decreases.

I was so scared of ruining the pattern that I spaced the decreases unevenly and worked fewer decrease rows than I usually do. As a result, the first hat is kind of.... butt-shaped. I know, I know, that's totally rude, but it kind of has butt cheeks at the top? That's the only way I can describe it. Now, obviously, when I put the hat on it stretches out and looks great but I'd kind of like the hat to look normal when it's just lying there, too. So the decreases are going to be re-worked, re-vamped and re-fried.

That should be done pretty soon. It really is a fun little slip stitch pattern. This second hat is done in Wool of the Andes. The brown is called Fedora, and the orange was actually dyed with Kool Aide. I like that I actually know what the yarn is for this hat.

The green one is so soft and nice, but I don't know what the heck it's made of. I know the green part is Lion Brand's yummy cashmere blend but the brown is so ancient I haven't a clue. It must be acrylic, because it came from the times before I had ever been to an LYS. But it is so soft and squishy. I want to say it's Lion Brand Microspun  because I remember buying some in the past, but I also remember Microspun as being very very splitty, which this yarn was not. Actually, I found this yarn in the form of a hat in my mom's room. A hat I had made before I understood the purpose of gauge (it would probably have made a better purse) and which I realized I could make into yarn again. And I think if I had frogged Microspun it would have untwisted and become unworkable. So I really don't know. It will remain a mystery. Which is too bad because it is a wonderful yarn, and the hat is incredibly soft.

The Wool of the Andes, by the way, is not as soft as I had hoped and I imagine this orange hat will have to go to someone with a super itch-resistant forehead. Still, because it is wool, I am looking forward to blocking it so the stitch pattern is more pronounced.

So that's what I'm up to. Now I'm going to go back to sniffling, reading Fox in Socks (with a sore throat!) and knitting.

Posted by grandmastatus at 1:42 PM

Email ThisBlogThis!Share to TwitterShare to FacebookShare to Pinterest
Labels: design