How I Ended Up With Yak Yarn

I had the weekend off and ended up driving North a bit to visit friends, sight-see, and try to find some local yarn.
We had a blast, but somehow the yarn thing didn't work out. I decided I wanted to go to Mostly Natural, a little sewing slash knitting shop that I'd been to once before. It was sort of an unusual experience because the person behind the counter- knitting a beautiful beret- was a man. I talked to him, Eric, for some time and discovered that it is a family-owned business and he was originally hired to help do carpentry work. When he was interested in working behind the counter they told him he had to learn one of the skills: sewing, knitting or crochet. He tried all three and he liked knitting best. Crochet, he said, was too easy! He had knit all the caps in the shop that were for sale and I quite regretted having people in the car waiting for me. This time I decided I would go and shop around as long as I wanted.
The only problem was that I couldn't remember where it was. Too proud to rely on my fancy GPS (a decision I regret) we drove around Diamond Springs for longer than I'd like to admit and then ended up just going to Lofty Lou's which is right on Main St of Placerville. 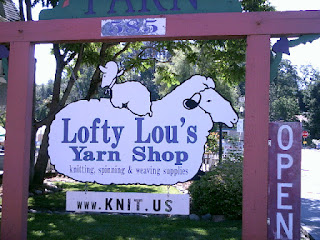 We got there at 4 and I was fully prepared to spend the next hour and a half there poking around until I found the perfect chunky weight wool for a hat. Something soft and preferably local. That was the plan.
Until I found out they actually close at 4. We had gotten in the door about a minute beforehand and so it just felt really rushed and like we were stepping on their toes. I grabbed a skein of clearance Yak and got out of there without so much as squishing anything.
Well that's not true. I squished some qiviut because I always do and the lady at the counter said, "The stuff in this basket is pretty pricy...." and then trailed off like that would get me out of the store. This was before she told me she was closing Right Now and I got a bit offended. Not visibly, of course, but I had always heard of but never actually encountered yarn shop snobbery. Then once she told me she was closing I realized I was the rude one and got out of there.

I was pretty bummed out because driving to the yarn shop out in Placerville is a costly and time-consuming thing and I ended up with nothing but clearance yak.

I really think that working at the Hobby Lobby is feeding my soul indigestibles. I feel like I really NEED that small yarn shop experience where you get to chat with the owner and talk about gussets and then buy yarn that comes from a sheep with a name and a personality. But it will have to wait until next week, at least. Maybe I'll throw down for some qiviut.

Anyways, the yak is actually pretty exciting, although the label calls for dry cleaning and I'm not really sure a person like me should own anything that needs to be dry cleaned. I also saw that label AFTER deciding to make a hat out of it and I don't know if that means something bad will happen if you wear it in the rain. The yarn is Shokay Shambala Yak in a soft dark red. It was 50% off, and I decided a nice textured hat would be nice. I'm just making it up as I go and it looks like this. 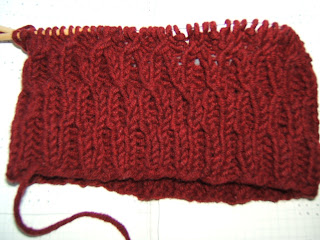 I realized directly after going to Lofty Lou's that I didn't have a circular needle for a hat and we ended up driving all the way to Michaels in Folsom so I could pick one up. And then they had their Paton's Classic (remember how that's my favorite yarn?) on sale and I bought a little bit of that. Which I kept in my trunk because I don't actually think I have room for it in my stash and also because then my mom would be like "MORE YARN?" when I came in the door. Because by a little bit I mean about 7 balls.

What's funny is that in Michael's I ran into a lady who needed help picking out a needle size and I helped her out, sang the praises of interchangeables and then we both admitted to each other that we had just stepped out of "real" yarn shops- she Rumpelstilskin and I Lofty Lou's. Then we sort of giggled about our addiction and I, at least, felt a certain kinship will all knitters world-wide.
And that's the thing I was looking for in the LYS.

Anyways, sorry for the long post and for my general absence in the blogosphere. Work and all... I hardly ever get on the computer at all. Happy knitting. Maybe next time I pop in I'll have a yak hat to show off ;)
Posted by grandmastatus at 9:10 AM