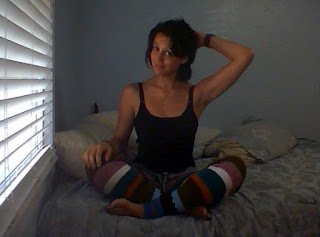 I have always wanted to knit pants. From the moment I first saw this pattern- and especially upon sight of such beautiful pairs as rududu's, maritparit's, and karen's- and I cast on a pair immediately. In sock yarn. On size 0's. That pair is still tucked away in a drawer, most likely because hours of knitting would provide only an inch or two's progress and having reached the knee I knew it was only going to get worse. So I cast on this pair instead. (Worsted weight is my favorite.) 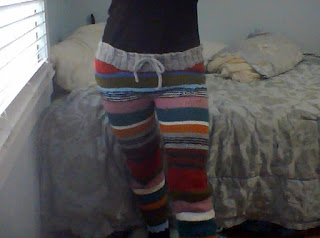 My gauge was closer to 4 than to 5 stitches per inch so I didn't really follow the pattern- especially since increasing as readily and steadily as EZ directs would cause giant bulging calves. Instead I just knitted and tried them on frequently. FREQUENTLY. The reason I decided to knit pants is because EZ says it takes less wool to make a pair of pants than it does a sweater and I thought that meant it would be faster. You know why it's not? Because when you're knitting a sweater and you want to try it on to see if it fits you can go right ahead and throw it on over your shirt.
Pants not so much.
There was a lot of settling into the couch with my knitting, realizing I had to try on the leg again, going back to my room, removing my pants, donning the knitted pants, groaning to see I still had an inch or so to go, and settling back to the couch. Luckily the second leg had no such setbacks because I just read the knitting from the first, but the bum! Oh, the bum. 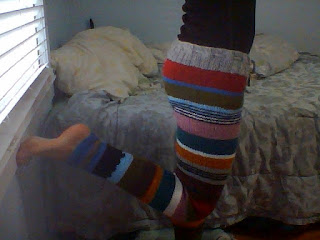 Following the directions led to a bum that was not for me. So I frogged that and I added only a bit of short rows, and then still had to rip back about 6 of them. There was a lot of trying on involved, but at least they finally fit decently and looked like pants.
That was a great hallelujah moment, especially since by then they had already been on the needles for more than a month.

Then there were the ends to weave in. 99 of them. I counted. 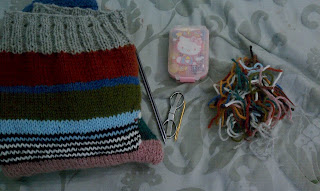 Then the I-cord. I need one of those I-cord machines. (Also a pom-pom maker that doesn't involve me making pom poms. Like a magic one where I just hand over the wool and in return receive a beautiful pom pom.) My hips are something like 36" so the I-cord had to be that and then some.

Then, finally, in 100 degree weather, I donned my wool-ease pants for this wonderful photo shoot.
And maybe danced a little. Awkwardly. 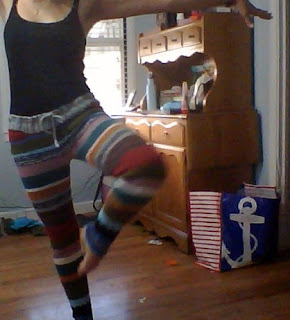 Check out more FO's with Tamis Amis and hopefully I'll see you again next Friday. (How long has it been since I finished anything???)
Posted by grandmastatus at 12:00 AM