I've been very good lately about working on one project at a time. I finished something on Monday, and then cast on for something I've had my eye on ever since I found out my friend was pregnant: Tanis's Sunnyside Cardigan. I love that with only a slight modification, the cardi can be made a little more gender-specific. I'm knitting the boy version, which features cables instead of lace and a garter hem instead of picot.
The yarn is Knit Picks Bare, that I dyed last year with food coloring and vinegar. It has been sitting in the stash for a while because I really like knitting socks with fingering weight, but the color is too boring and plain for simple socks and every time I start a pair of complicated socks they end up in the WIP pile for a year until I frog them... So I decided a baby cardigan would be the best idea for it, with a little bit of cabling so it isn't too boring. The best part is that, unlike socks, I don't have to knit two of them ^_^

So that's what I'm working on. Unfortunately, until I finish the raglan increases it's a little bit less brainless than I'd like, especially for traveling or waiting in lines, so I also cast on another project.

It wasn't a well thought-out project. I wanted socks. That's not true. I don't ever really want socks, I just want to knit socks. But right now all my sock yarn? You wouldn't believe it. None of it is sock yarn. I have an entire basket full of sock yarn, and none of it is suitable for socks. The Huntington? I'd have to do stripes to get a pair and I hate toting around more than one ball. The Koigu? The wrong color for plain socks, and I've gone over my problem with complicated socks. The Heritage Silk? Not variegated enough. The Twisted Sunshine from the wool festival? Too much of it. The Kroy Jacquards? Not enough of it. It's a problem. (Luckily my birthday is next week and I think this is a problem I can solve.)

So anyways, I decided to cast on some baby socks for my son. That way I'd get rid of that single skein of Paton's Kroy that was just taunting me, and my sock-knit craving would go away. So I sat in line at the DMV for a full 2 hours and nearly completed one sock. A visit to my sisters completed the sock, except for the toe grafting.
At that point  I showed it to Vyvyan and said, "Do you like your new sock?"
He nods, "Uh huh."
"Are you gonna wear it?"
He shakes his head. "Uh-uh."
"Yeah, you are, lets try it on."
I put it on his foot and um.... It was about two inches too short. So I frogged the toe, put it back on for a picture and to determine how much was left to knit and he screamed and pulled at it and I just sighed and gave up and frogged it right there. Right off his foot. 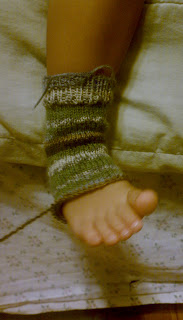 I decided to add the ball to my bag of scraps and I can make some Patchwork Socks. Since they seem to be the thing to do. I mean, all the cool kids are doing it....

Posted by grandmastatus at 12:00 AM