Today I'm showing off a finished object of a friend's. 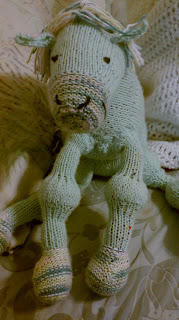 My friend Lara (The Whitty Knittress) made this wonderful little horse for my son's 2nd birthday. I was shocked at the speed at which he came to be: she called me to ask what color yarn to use on the June 1st and on the 9th there he was in all his plump pony glory!

This little guy was christened 'Pony' by my very imaginative and creative two year old- the same little boy who named our fish 'Fish'- but when Pony gets in trouble we call him by his full name, Ponyboy. 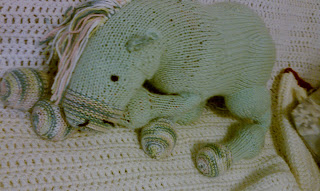 She used this (free) pattern- I was horrified to learn that this horse pattern is now available for free on Lion Brand, because I bought the entire book Dream Toys for this pattern alone.

Lara and I have entirely different knitting styles now that I think of it. For one thing, she was never afraid to jump in and start something. It took me years and years before I was brave enough to attempt something without a pattern: Lara was designing things from the very beginning- cute little toys like this guy: 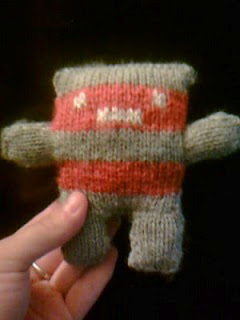 Once while making a little toy, she got bored with making limbs and just attached some red yarn sticking out where his arm should be and decided his arm had been chopped off leaving a stream of blood.
She sent me a bone in the mail a few months ago. She didn't use a pattern for it, she just wanted to make a bone and so she did: 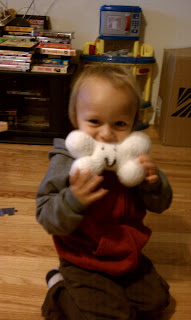 It's kind of neat, seeing the different kinds of things we knit. Or like how if I knit the same pattern more than once I kind of go crazy? She's one of those knitters who makes multiples. Like, one right after another multiples. Like, you know those girlfriend market bags? Yeah she's made 5 of them, so far! I swear, if I couldn't poke her and feel flesh I'd think she was a machine. I mentioned earlier how quick she cranked out that pony.... maybe she's a cyborg and I just never knew all these years....

Anyways, I just thought I'd share a few of someone else's finished objects today. Check out lots more with Tamis Amis.
Posted by grandmastatus at 12:00 AM