I got a little knitting done this week, and finished up the Sunnyside Cardigan. 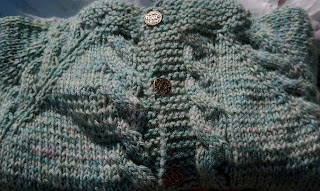 Yesterday I went hunting for the buttons to finish off the sweater and I realized that it's actually very difficult to find buttons for a knitted garment! For this particular cardigan I needed buttons that were:
1) Not too big and not too small: my buttonholes were simple yarnovers.
2) Circular in shape (Dinosaurs and Trucks were my favorite, but they just didn't fit in the holes)
3) Decidedly boyish rather than girly
4) Weren't drowned out by the greenish color of the yarn, and also didn't contrast too greatly. I found these perfect little round gumdrop shaped buttons but they were the brightest garish red. It looked like droplets of blood!

I ended up with these cute little metal buttons with- I realize now that this picture is absolutely horrid- an image of 2 lions with a flag: an unknown lion crest. 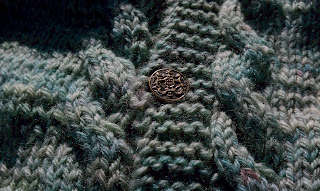 I picked them up at JoAnns for $2.75 for 4 buttons. Which is irritating because I needed 5, and now I have 3 left over.
I searched the world wide web, but this is the closest image I could find that is almost like the buttons I have:

Also, after reading an article by Techknitter about sewing on buttons, (a task I consider an absolute chore!) I was set on buying shanked buttons. Now, call me silly, but I have never used a button with a shank before. I always use 4 hole buttons, because I was under the impression that buttons with shanks are "hard" to sew on, and that having 4 holes gives me less of a chance of ending up with a crooked freaking button. 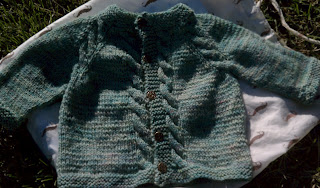 Well I'm here to tell all you knitters who are not sewers, and all you who dread finishing work and loathe sewing in buttons with a passion: Shank buttons are the way to go. It was so easy sewing these buggers in, and I only sewed one in upside down and that was because I didn't look hard enough at the buttons to realize they actually had a design.

So I'm going to give the sweater a proper wash and block, then put it aside for my friend's baby shower. 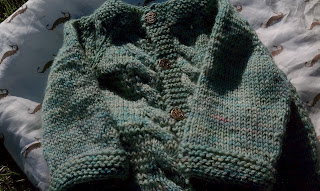 The yarn is Knit Picks Bare dyed with black tea and food coloring.
I used size 4 needles for the body and size 6 for the sleeves (My name is Cecilia and I'm a loose purler.)


Check out more FO's with Tamis Amis.
Especially this one, which was knitted by a truly awesome 11 year old girl.
Posted by grandmastatus at 8:50 AM