I've never really been yarn bombing before. Once a few years ago I tied a small bit of orange acrylic to a pole, but I really don't think that counts... I went back to check on it a week or so after the fact and it had been cleaned up and probably thrown away. It wasn't anything impressive; it was just a square, striped with garter stitch and stockinette with a few yarn-overs thrown in. But after a reminder that International Yarn Bombing Day is June 9th this year, I busted out some woolen scraps and whipped up a cute little project to do that very thing.

To be honest, I'm not sure I'm a fan of yarn bombing.
I feel like it's kind of a waste of yarn because, even if it looks really cool for a minute, it ends up all bedraggled and dirty and basically gross. Especially if it's left out in the rain and sun.
But I was inspired by One Sheepish Girl's strawberry idea, and thought if I did some cute intarsia then it wouldn't be so bad. Maybe, in fact, somebody who saw it would take a liking to it and take it home!

Instead of tying it on with string like I did with that old garter stitch square, and instead of sewing it on where it would be stuck on the tree or pole for life, I decided to go with a more temporary fixture:

I chose these cute little buttons because they are loners in the button bin, and were always taunting me when I would knit baby items where I needed 4 or 5. For the straps I just picked up 5 stitches, knit 14 rows of garter stitch, then did 2 rows of easy YO buttonholes so I have a bit of a choice as to what size pole or tree I put it on.

I liked that, since it's just a sort of throw-away project, I didn't have to worry about the reverse side looking pretty: 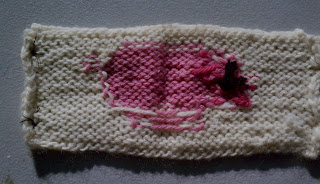 Anyways, I'll be out finding a nice little place for this pig.
Wish me luck!

I seriously am in loooove with knitting these. Every new scrap I pick out I'm like, "Awwww, these were Will's socks... Awww this was Tennyson's cardigan that's actually still not finished and gee maybe I should start that second sleeve.... Awww this was the pair of socks I made for myself and then the dryer ate one.. Awwww this was supposed to be a hexipuff," and so on and so on. Seriously. Great fun.
Posted by grandmastatus at 6:55 AM