WIP Wednesday- Something old, something new

Today was another work-in-progress Wednesday, and before I decided what I'd work on I took a peek at my ravelry page. Guilt surged through my veins as I counted 12 projects designated "WIPs," especially since I don't add all of my projects to Ravelry.
Like the one I cast on for last night, for instance.

Or the project I cast on the night before...
Or the mitts that have been in the same state of progress for more than 2 weeks.
﻿ ﻿ I don't need to mention the hoard of first-socks hiding in my closet, or the mass of unfinished sweaters (mostly bodies- why don't I ever make it to the sleeves!?) collecting in bags around my room. I especially don't need to delve into my stash or the recent acquirements thereof.

So I was happy it was WIP Wednesday. Thought I could really make some mileage. 'In fact,' I thought, looking at my Ravelry page, 'I can finish a sweater today!'
Don't get me wrong! I'm not completely deranged; I'm not misinterpereting the amount of hours in the day. No. I decided I would finish my Wear the Wild Things Are sweater. Which has been completely done for almost two months. Completely done EXCEPT for the ears.
Each ear is merely 24 rows of knitting. Plain knitting with decreases on size 10.5 needles using extra chunky yarn. I thought I could finish the ear (oh, did I mention I actually only had to knit ONE ear because the first was already done?) and sew them on this morning with no problem and a beautiful Finished Object to show for it.
I imagined myself dancing around in my new rompas suit, and having my friends take awesome pictures.

It was 95 degrees in my house today.
There was no way I was going to put on a double chunky weight sweater on- not even long enough to place the ears. Instead, I pinned the ears on using Tigger as a head-mannequin and stuffed it back in a drawer until it's cool enough to look at the damn thing without sweating.

Instead I cast something on. But NOT something "new." Instead, I cast on the second sock for Will's (incredibly mismatched) stripey sock pair. 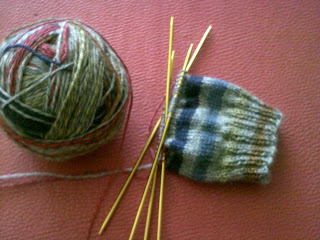 Somehow, I still feel like I accomplished something
Now I'm going to go lay down. Cuz it's frickin HOT.
Oh, anyone notice I missed Tuesday Video Review?
I didn't. Not until like 20 minutes ago.
Posted by grandmastatus at 4:23 PM