Back online! A FO and a WIP

Turns out they meant it might be out all weekend, and thankfully it won't be. :)
So, then, I promised a finished object and here it is.

So, what I LIKED about this project:
1) The color- beautifully hand dyed
2) The belt design
3) The yarn (I LOVE patons)

What I didn't like:
1) The pattern was very badly written
2) Sewing the buttons on (I kept doing it lopsided since I had to sew the button onto the belt and onto the mitt at the same time)
3) How wide the mitts turned out
4) The thumb gusset. It increased too quickly and left a very small thumb hole.


As for the new project with the malabrigo? I'm halfway done.

Unfortunately, once I finished the first glove I had this much yarn left over. 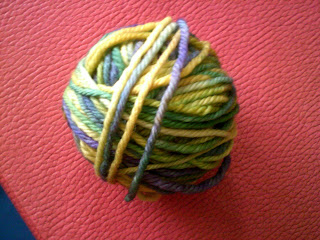 But I figured on that when I started. Thing is, Will bought me this yarn a long time ago at The Urban Sheep in Modesto. I really really wanted to make a hat. So I had them wind it into a cake for me and cast on immediately when I got home. I searched ravelry for a good pattern and settled on capucine(rav link) because the example project was with a nice multi colored yarn and I thought it would look really nice.
I'm not even going to show you what it looked like on. There's a picture on my ravelry project page if you want to see it on my head. Instead I'll show you how it looks on Vyvyan, since he makes everything cuter. 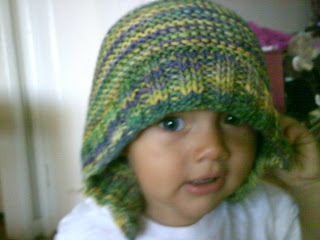 Here's a picture of it laying flat. I had cut the tassle off already (thankfully I never got around to making the other two tassles or I might not have enough yarn to finish the mitts) 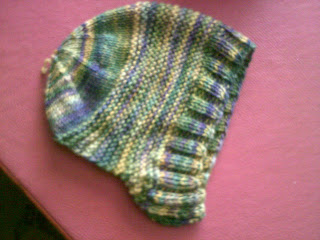 So, ripping that out gave me two more little balls of yarn.
I hope so. I absolutely adore this pattern. It's super easy from the wrist up to the thumb, then the thumb is added later ingeniously (all you do is add in waste yarn) then the top shaping is interesting enough to keep you on your toes but not too hard to do while watching an episode of Dragonball Z.
The finished object is beautiful! And that's even before I add a nice big contrasting button!
I used 3's instead of 4's since I generally knit loose and I ended up with a nice snug mitten.
Love!

And maybe when I'm done with these I can finish up the pair of fingerless gloves I chickened out on.
Posted by grandmastatus at 11:48 AM