This week's challenges were:
1) Andalusian Stitch
2) Waved Welt Stitch
3) Pennant Stitch
I completely forgot it was Sunday, on account of the miserable episode with the Ringwood sweater (more info tomorrow) and didn't start working on this until 9 pm.

SWATCH 1: Andalusian Stitch
This stitch pattern was eerily similar to the Ringwood stitch pattern that I've been working with for way too long to make a sweater that continually needs frogging. (more info tomorrow)
Ironically, it was the only one of the three swatches that I didn't have to frog more than once before completing.
This bad boy was easy and effective. I'm a big fan of this basic stitch pattern. It's basically the ringwood pattern with an extra knit row thrown in because it's not made in the round.

SWATCH 2: Waved Welt Stitch
Frogged frogged frogged! I messed this one up multiple times while trying to watch TV in the dark while tired. After I frogged it I just skipped right on to the next swatch, which looked easier. (It was, but I still had to frog that one too.)
This swatch is ugly. It's not my fault. It's not really the pattern's fault either. It just shouldn't exist. I see no reason to knit or wear anything with this stitch. The waved welts look a lot like scar tissue protrusions. The whole swatch is bunchy and it bears no resemblance to the pretty (obviously cotton) swatch in the book.
Plus, the effect is just NOT worth the effort. Not a fan, my friends. 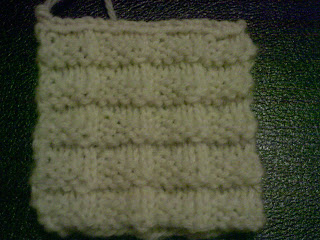 I've used this stitch pattern before. It's one of the few I've picked and worked with from the book before embarking on this project. The first time, I used chunky yarn and rather small needles and made a scarf for a coworker. The scarf came out stiff and ugly, and I kind of blamed the pattern.
WRONG.
This stitch pattern is easy, and looks great. It lays flat, which I'm a fan of, and though it isn't reversible I kind of like the reverse side as well.
The repeat is 4 rows and it kind of goes:
K 1 row
p1, k4
k3, p2
k3, p2
p1, k4
k 1 row
So you see, it kind of builds upon itself. 1, 2, 3, 3, 2, 1.
If that makes any sense. At any rate it makes for easy going. I only lost track because I thought the reverse side was the right side and added in an extra knit row.
﻿
﻿ Why can't I add this picture? 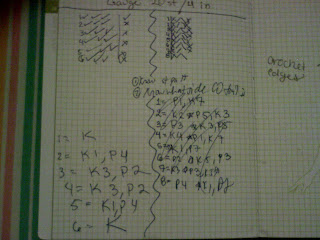 Ha!!! I knew typing something would work.
Anyways, as you can see I had to track each and every row and mark them off after completion. The squiggly line diferentiates between the Waved Welt stitch and the Pennant. Pennant is on the left because, remember, I got frusrtated with the waved welt and moved ahead.
Now, I don't know if it was because it was late at night, or because of the room being dark, or because of my brain being fuzzy, or because of the patterns themselves, but scratching off each row upon completion really REALLY helped for me this time around.

Anyways, that's it for this week!
Next week's challenge is:
1) Pyramid Stitch
2) Seeded Check
3) Mosaic Stitch

And tune in tomorrow for updates on the Ringwood sweater. And for a picture of a puppy.
Posted by grandmastatus at 11:26 PM