I was wringing my hands wondering how I was going to finish anything by Friday when suddenly I realized, I DID finish something this week!
I bought the yarn and cast on for this sweater on the morning April 5th, and finished it in the evening on April 7th. Not bad, considering I basically designed it from scratch.
I definitely took inspiration from this pattern, which deserves all the credit, but I did make a few changes so I'm quite proud of myself.

I made a swatch and did some calculations. At my gauge, if I would have followed the pattern (which didn't give a gauge) I would have had a 45" sweater. I decided, rather than worry about bust increases, I would just do the ribbing on small needles and that the stockinette was probably stretchy enough to accommodate my bust. Then I knit for a while until I decided I'd rather have a V neck than a round neck, started that and then began the armhole shaping. 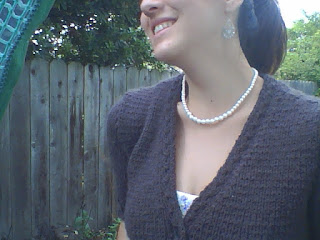 (Information for the armscye shaping and V-neck was found in The New Knitter's Template, a book I bought on a whim when KnitPicks had one of their 40% off sales. It has come in handy more than once, and will, I hope, continue be very useful in the future as I start modifying more designs to fit my body.)

After I worked some short rows to shape the shoulders (thank you Paula Ward!) and grafted them, I picked up and worked the sleeves top-down. Which was pretty fun.
On the whole, it was a very pleasant knitting experience, because I was never quite sure if it was going to work out! It was nice to be able to try it on easily (Definitely better than when you do a sweater in pieces and have to pin the whole thing together!) and it served very well on Easter morning...

Oh, and I knit the cabled band separately and seamed it as I worked. I actually knit two pieces, because I didn't want the cable to be upside down on one of the fronts. I grafted them at the back neck. I used mattress stitch to attach it as I worked so that I didn't accidentally end up having to work in any extra length. 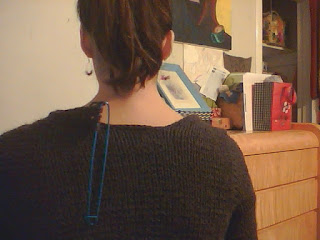 Of course, now that it's done the yarn kind of obscures the neat cable pattern on the band anyways, but oh well...
At least the YO's in the band double as buttonholes. (sort of) 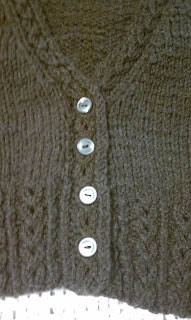 I kept thinking about what Maggie Righetti said in Knitting in Plain English: How she traveled to Mexico and stayed with women who "instead of using a pre-written pattern, they began with pictures clipped from European fashion magazines, yarn and needles, a few measurements, and a pencil and blank paper. They finished with glorious, beautiful, well-fitted creations."

I maybe wouldn't call my creation "glorious," but it sure was a new experience for me to knit from a picture rather than a pattern. I wish I had used a smaller needle on my purl rows, though, because it looks really ratty with every other row loose. Plus it's not exactly the greatest yarn in the world. (Though it is REALLY soft) Still, I have my notes and could easily make another with better materials.

Unfortunately, I didn't wash my swatch so I have no idea what will happen to it when I inevitably wash it.

That's it for me!
Well I sort of almost finished my crocheted blanket but I have some more plans for it.
It is technically a blanket though, and therefore belongs in this post ;)
Check out more FO's with Tamis Amis.
Posted by grandmastatus at 12:01 AM