So guess what I found in the stash bin today: 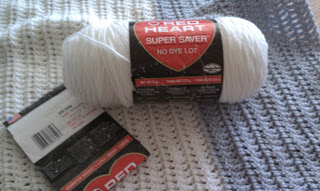 Option 1:
Pick up along the "cast on"(stll don't know what that's called in crochet) edge with Soft White. After th third ball is gone, buy a new ball of "Light Grey" and add that in after, so that it goes 1 skein grey, 3 skeins white, 1 skein grey. That would be balanced, but I'm not sure I'd like the way it would look. However, I've already established that I don't care how a crocheted afghan looks because when I wrap myself up in them I feel cozy no matter what.

Option 2:
Pick up along "cast on" edge with "White" (Much much brighter color) and work 2 balls of that in. Then go buy another ball of Light Grey and it will go 2 skeins bright white, 2 skeins soft white, 2 skeins grey. That would have a nice gradient, and I like the idea a lot. However, I only have ONE skein of bright white- the other skein is in a hibernating project. I would like to re-use the yarn, but I was working with it doubled so it would be a pain to retrieve and I think I'd end up buying another ball of white. So the problem with that plan is ... buying 2 balls of Red Heart wasn't really in the plan. Ever.

Also, I neglected to mention last post what I plan on doing with the border. I've decided I'm going to do it in a dark red/maroon color. I'm either doing an easy shell/wave stitch, or a cute pointy picot trim. I also plan on adding some big bubbly hearts to the main afghan, either as appliques or surface crochet. In my imagination, it is very modern and hip.

For now, my baby is napping so I'm off to watch a movie and work on the big ol' blankie. ^_^
Posted by grandmastatus at 1:40 PM