In an unfortunate turn of events, it seems I have only one finished object to offer you this week and it is not pretty. Or impressive. Or even large.
See...I wanted to make a frog to celebrate Save the Frogs day with my son. So today I share with you, my failure of a frog. 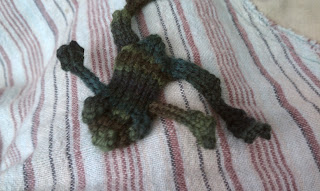 The state of the thing is embarrassing: his eyes protrude from his face shamefully, his legs flail wildly and worse still, he is hopelessly flat.
So, yes, this is my sole knitted object this week. A frog that looks like he has had an unhappy vehicular collision resulting in increased depression. Literal. Depression.
I tried to fluff him up a little, give him some life for the photo shoot, but well.. his flatness remained. 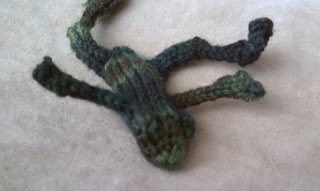 Let's face it: I made a roadkill frog. His only consolation is that he snugly fits in the smallest pocket of my purse and so I have decided there he shall remain. Flat though he may be, he is a frog and my son quite likes hopping him around and going "ribbit!"

I used size 0 dpns and got the free pattern from Frogs Vs Fungus. I used some leftover Cascade Heritage Silk (I thought it was cute that the project it was leftover from was a sock project called "Tadpoles") and he worked up in an hour or so. The frogs in the picture are much more plump, and I highly suspect that the designer stuffed them although there is no mention of it in the pattern. I really should have thought to do it myself, though. (He is so utterly flat.)

Regarding the pattern, I think there was a mistake in the increasing (or was it the decreasing?) but I wasn't paying a world of attention so perhaps not. I did like the clever short row eyes, but the legs were wholly unsatisfying. I had originally intended to make quite a few of these frogs, but after this one... well... Let's just say I wouldn't want to participate in Save the Frogs day if they looked like this!!
So, the next frog I try (Yes I'm still set on making a frog) will be this crocheted tree frog.
This FO Friday is a double failure because my mom's Mara is still unfinished and her birthday is Monday! (EEK!!)

So head to Tamis Amis to find -hopefully- some more successful projects!
Posted by grandmastatus at 12:03 AM