I am an auntie once again.
We've been waiting for this little girl to make her debut, and she decided to grace us with her presence 10 days late.
Of course I have a few baby knits for her: The Hello Baby Cardigan, and The Gigantic Pink Blanket have been done for a while now. But the second I heard the news (I got a text message at 5:30 am) I got the hankering to make some little booties too. It may have had something to do with the fact that my brother sent me a picture of her tiny little naked feet.

After a bit of rummaging though ravelry and stash, I decided to use some Koigu Premium Palette (purchased for my BKQ) to make the Saartjes booties. 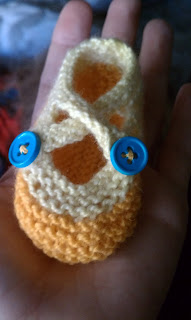 The buttons kind of overwhelm the whole thing, but rummaging through my button stash produced nothing smaller. Well, that's not true, there were some pink buttons but I liked the contrasting blue.
Even though that makes them look kind of like a shocked Homer Simpson when you turn it upside down. 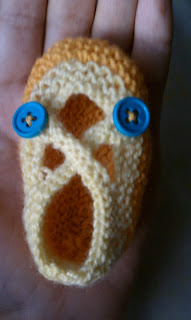 I did modify the pattern in that, instead of working a long-tail cast on for the straps I got lazy and just did a backwards cast on. You can see the adverse effect of that in the corner between strap and bootie on the left. I plan on just tightening that up later on. You know, when I'm not so sick of weaving things in. It's shocking, actually, the number of ends to weave in for these tiny little shoes. I'll post a picture when I finish the second one. 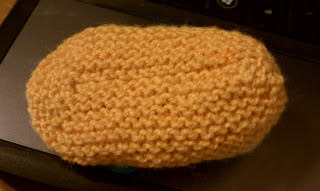 And what's that?
Oh yeah, that's right: I learned how to graft garter stitch.
Helluva lot better than the slipper I made for myself!!

It actually turned out to be much easier than I had expected. Easier, in my opinion, than stockinette kitchner, which is very interesting since I must have done "regular" kitchner at least 100 times more than I have done it on garter.

Also, I just want to say how much I appreciate having a knitting blog. It means that when I want to jump on my facebook and shout out to the world, "I can kitchner on garter!!!" I no longer have to deal with the inevitable "what?" "huh?"s and instead can just post it here. You know, for the people who know what the hell I'm talking about.

Anyways.
One bootie down. 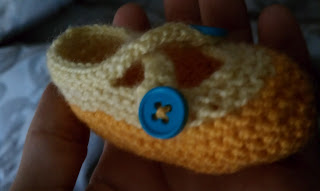 I have a DMV adventure today before I get to meet my new niece, so I'll be using that time to work on the second one.
Posted by grandmastatus at 10:27 AM