Here's my bavarian hat, in a crappy mobile phone picture.

Here's Vyvyan's chunky sweater. This was yesterday, before I took out that left front and reknit the whole damn thing. Actually, what's really lame is that I finished both fronts AND sewed them on before I realized I had big problems and reknit both fronts. It's still not done, I still have to make the hood. When it's done I'll post a pic of Vyvyan being all warm and cozy. 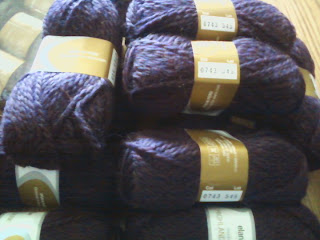 AND HERE.......... are my 30 balls of yarn I've been waiting and waiting and waiting for. I haven't decided whether to make an afghan or a sweater out of them, but I had imagined they would be slightly bigger and I'd have enough to make both. Upon realizing how small they are, maybe $20 a bag wasn't so great after all... Oh well. I love yarn mucho.

Also, I was shopping at TJ Maxx yesterday with my sister and something kind of funny happened. Instead of looking for things I wanted to buy or even things that were my size, I went looking for things I could knit. First I went to the scarves hats and mittens, then I went to the sweaters and fondled each of them while taking mental measurements. At one point I found a sweater that I liked AND that was in my skill range. I grabbed the tag to check the gauge. That was the point where I realized that what I was doing was odd. Of course there was no gauge on the tag, only the company label, the price tag, and a big "M." I was like wtf?? Oh yeah. This is a store. For people who buy things.
It tripped me out a little. Maybe next time I'll bring a measuring tape.

Dunno if I mentioned yet that I bought Debbie Stoller's new book. I'm totally excited about learning how to double knit, but I'm not having a ton of time these days what with the chunky boy and school. But at least I can look at it and stroke it's beautiful pages and imagine the one day when I, too, can knit fair isle skull socks.
Posted by grandmastatus at 11:06 AM