So about the Fibonacci scarf. I am an idiot. That's all I really WANT to say about this, but I suppose I have to explain the whole story...

Will bought me the yarn so I could knit his bestest friend a Fibonacci scarf. Seeing as said bestest friend is a mathematician and all. So it's a Christmas present for Duncan. And I was like "What? You're buying me 5 balls of Alpaca Love right now? Heck yes I'll knit you a scarf I'll do whatever you want just hand over the yarn!"

And then I realized how knitting a reversible scarf with uneven stripes might be a bit of a problem. I could use garter stitch of course, but we all know about that unpleasant stripe that garter stitch has on it's reverse side when you start using two colors. But I thought... You know, it might not be so bad. And garter stitch is easy. And stockinette would roll, and if I did a garter stitch border it wouldn't be reversible and so garter stitch is the best way to go. Except for tubular/double knitting but learning a new technique frightens me especially when math is involved.

So I cast on 24 stitches and started going.
One row in, five rows in and... The stripe is happening! And it is ugly! And there's nothing I can do about it because I have to add colors on both sides due to the nature of the Fibonacci sequence.
(If you don't know the Fibonacci sequence I will now explain it to you. All you do is add the rows in the two previous stripes to get the number of rows in the next stripe. So: 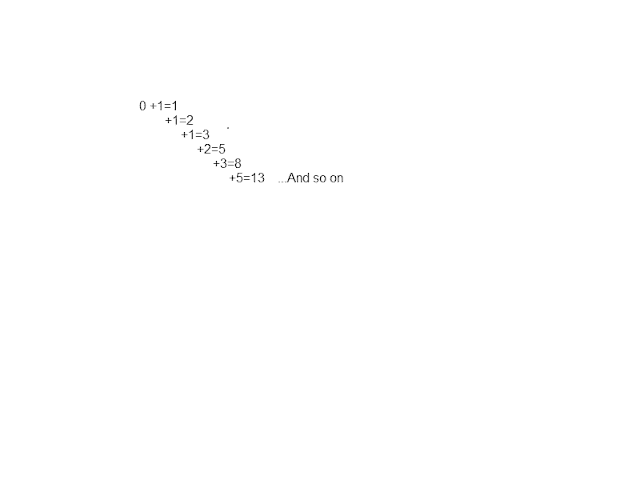 Anyways I realized that garter stitch wasn't working out. And the stockinette with the garter stitch border would be unattractive to say the least. I hate when scarves aren't reversible, it makes me crazy and I wouldn't ever want to say that I made one. (we'll ignore the cabled one I made last month, because it was pretty)
So I was doomed to double knitting.
I looked it up and found that it was much simpler than I'd imagine.
Cast on an even number of stitches
row 1 and all subsequent rows: K1, sl1 wyif, K1, sl1 wyif
TWO rows = 1 row (Because you're knitting in a tube. So the first row you only knit half the stitches and the other row you knit the other half, making one round. Get it?)
In my superstar knitting book, Debbie Stoller advises "YOU SHOULD ADD A NEW COLOR ON ODD-NUMBERED ROWS"
Well this gave me a start.
I'm doing the Fibonacci scarf! The colors change on odd AND even numbered rows! But I remembered what Stephanie Pearl Mcphee says, how all patterns are merely suggestions and Debbie Stoller DID say "should" instead of "must" so maybe it would all work out for the best.
And you know what? It did!
I was in shock, but I just kept knitting and had a happy ending.


12 hours later:
It's 2 am. I wake up to feed the baby and then when he settles back into the dreamy land I find that I can't sleep. I start thinking about the scarf and suddenly I realize why it worked out. Using tubular knitting I will add a new color on an odd number no matter what. Because 13 times 2 is 26, an even number. Then you change color on an odd number. And 21 times 2 is 42, an even number. Then you change on an odd number. In fact 2 times any number gives you an even number. So it goes without saying that you'll add a new color on an odd number. Because 2 =1.
Then I realized that I could have avoided the whole double knitting problem if I had just remembered that 2 makes everything even and knitted two rows for ever one of garter stitch.
No problems, less yarn used, happy knitter.
But as it is, I learned to double knit. So I'm pretty damn pleased anyways. And hey, an utterly reversible scarf! Truly, a happy ending.
Posted by grandmastatus at 7:35 AM