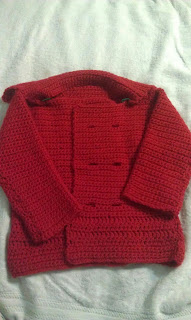 Pattern: Pea Wee Coat by Vickie Howell
Yarn: Washable Ewe by Stitch Nation
Hook: H
Modifications: None, because I'm a freaking beginner at this. Well, okay I may have inadvertently made one sleeve far longer than the other but that was less of a modification and more of an accident with gauge. Oddly, it's the sleeve that looks short in the above picture that is actually the long one.

Other than the sleeves, the crocheting actually went quite well. Then, of course I reached that point where I was done creating the pieces and was just kind of staring at them like "hmm... now what?"
I learned quite a bit in the last year about how to seam knit pieces properly and it was like I was starting all over again with crochet. Luckily I had bought that Craftsy course "Beyond Rectangles," and I logged on and watched the bit about seaming. You know what she suggested? Whipstitch.

The whole time I was seaming (and it took almost an hour to do this wee sweater) I was sitting there like, "Whipstitch? Seriously!? Whipstitch." but it worked. The seams are a little bulky but the blend in surprisingly well with the single crochet and it hasn't even been steamed yet! I still have to sew the collar on, though, and the pockets because a girl can only seam for an hour before starting to go completely insane. After that, though it's just about done once I find the right buttons for it.

I was so bummed because I thought I had the perfect buttons in my stash. 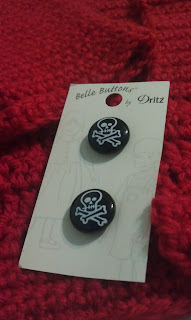 And it turns out they're only ALMOST perfect: They're too small and go right through the buttonholes. :(
So tomorrow I'll have to start hunting for some slightly larger skull & bone buttons. Le Sigh.

So that's where I'm at. And while I'm here talking about crochet garments let me just say that I am most likely never crocheting a sweater for myself. I'll stick with the knit goods and leave crochet for little stuffed animals and granny squares.

P.S>
Hey! It's wednesday! Guess I'm linking up with Tamis Amis ;)
Posted by grandmastatus at 11:51 PM