Is it possible to knit bad energy into things?
I have been so... overwhelmingly full of negativity lately and so s a prescription for my lingering depression, I thought a feel-good movie and chunky knitting just might do the trick. So I just sat down and knit a freaking hat. 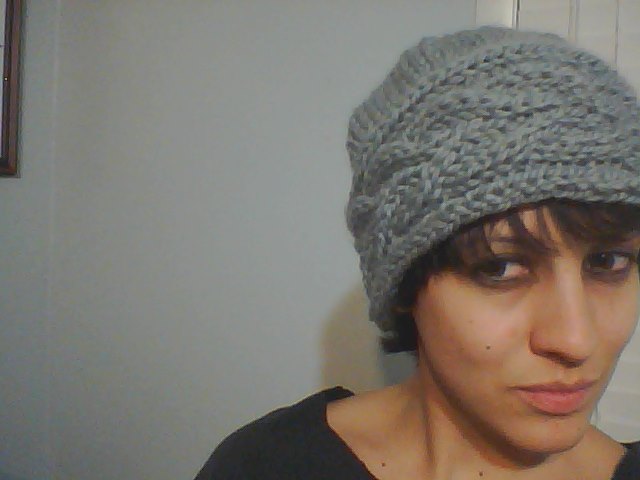 It's a pretty freaking hat.
But I'm afraid that I might have knit bad vibes into it, and so I don't think I'm ever going to wear it. Like, if I gave it away the bad vibes wouldn't matter because they're my bad vibes. Like maybe vibes are brain-specific and you can't catch mine from the hat I made? Doesn't make sense, I know, but that's how I feel.
In other news it is 1:30 in the morning and that mockingbird just doesn't quit.
I haven't been working on anything else- perhaps that is why my happiness has been missing.
Chunky knits are such a good thing for the soul. <3

Free pattern is Ardelle and I used some discontinued bulky wool I stashed away long ago. I truly think this hat is gorgeous, but I don't know if I want to add a pom pom. Probably not. I hate making pom poms and if I resist the pom pom urge I might be able to get another hat out of the yarn I have left...
And I kinda sorta want to make another one because
a) I didn't graft it shut I just seamed it which looks a lot less good
b) I think the extra slouch in the back isn't really my style
c) Almost-instant gratification is pretty cool

I can think of someone I want to gift this to for Christmas but I actually haven't spoken to her in years. Maybe it's time to find her on the book of face?
Posted by grandmastatus at 1:33 AM