I have decided that I'm going to pull a Julia whatever and knit one swatch from my Super Stitches Knitting book each day. I haven't decided when I'm going to actually start doing this. (The indecision probably stems from the first three swatches being Stockinette Stitch, Reverse Stockinette Stitch, and Garter Stitch. Not to mention I have no yarn to spare, in spite of having a lot of yarn.)

Speaking of yarn, here's some now: 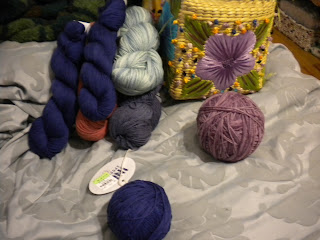 I actually spent a good chunk of time with my swift, winding these into glorious little balls of goodness.
Also, although I'm barely posting about this now, I actually did this quite some time ago. You can tell because my (really tasty looking) solo hank of crock-o-dye has already gone through this transformation: 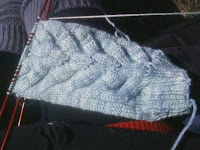 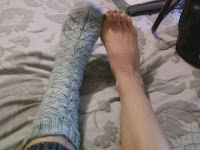 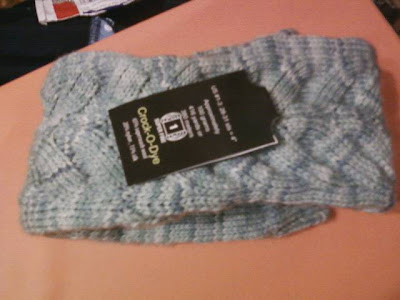 ﻿
﻿These are a pair of Tadpoles that are actually going to make it to the Christmas Present Pile. The last pair I couldn't resist and are in my drawer right now. I should have held out for this pair: they have silk.
However, it is a fine feeling to know that I have 2 Christmas presents done already for March.
Oh? I didn't tell you about my other Christmas present? Maybe that's because it turned out so hideous. 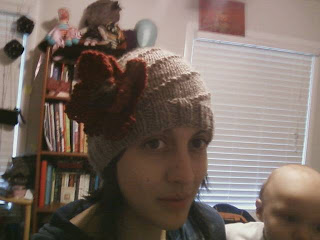 I really don't know what to do with it. On one hand the Hurricane hat base pattern is truly lovely and will complement the recipient's skin color perfectly and she loves big flowers a lot too. But on the other hand that flower is really flippin' big and looks, from the side, like someone just shot a bullet through the wearer's head and it's the grotesque blood splatter you'd see if you stopped time right at that moment. But all that aside, it's still DONE. Which is better than not having an early present. Besides, the flower is made of wool and maybe I can get away with sending it on a trip through the washer and dryer. If it is utterly ruined then I can take out my (dreadful) sewing and put something else on there. I mean, hey, they sell big flowers at Michael's right?
As an aside, that is my face without makeup and by that I mean that is my I-just-finished-a-hat-what-the-hell-does-it-look-like-on-a-head face. And by that I mean it's also my I-have-to-get-to-class face. And by that I mean it's just my regular face so that's actually a damn good representation of what I look like. Except I don't usually have a giant flower on my head. It's really too big, isn't it...So I don't know. I'm really on the fence with this one.
Upcoming:
Also, I've cast on for a new pair of socks. But you'll have to wait and see how they look because I am too lazy to get a picture and besides, I have already given you 6 pictures today. So there!
Posted by grandmastatus at 9:15 PM