Remember my brutally honest UFO post from a few months ago?
I've been thinking about my list of WIPs, and it's occured to me that most of the things that were on the needles kind of still are and that, if anything, my UFO list has grown.
In June, my UFO count was 12.
Of those twelve, I frogged 2 (Nancy & Judy shawl and the Dumb Baby sweater)
I said I was going to frog but never got around to actually frogging 2 (The Dr Watson sweater and the Guitar Man Socks)
I completed 2 (Will's wool socks and my froot loop socks)
That means SIX- that's half- of my UFO's from June are still UFO's.

On top of that, I have added more to the list.
About 8 more projects.
I think I'm becoming overwhelmed in the amout of projects I have on the needles. Looking at my new magazines I see many things I want to cast on, but won't be able to because the needles are taken, or just because I won't have enough time. I think it's time to really look at each of my WIPs and see if I really actually want to finish them or if I just cast them on on a whim and could stand to frog them just as easily.
We've all heard of Frog or Finish groups, right? I think I'll get on the bandwagon.

LIST OF WIPs (or, Where the Hell are all my Needles?) 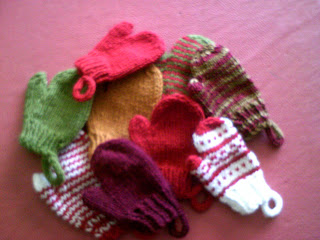 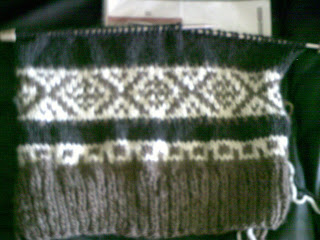 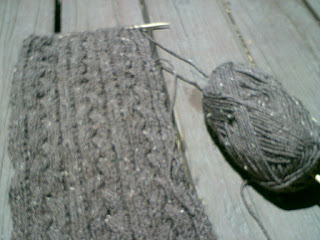 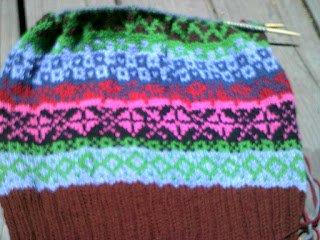 Started: May 16 2011
Yarn used: Various worsted, mostly Cascade 220
Needles: US 8 Clover 36" circulars
Progress: 45%
Last worked: May 17 2011
Enjoyability: Used to be fun because this project was undertaken as "knitting for enjoyment" Now i look at it and am disgusted by my color choices.
Prognosis: Will not frog; too many colors. Maybe change to vest and give away since someone has been complimenting it. 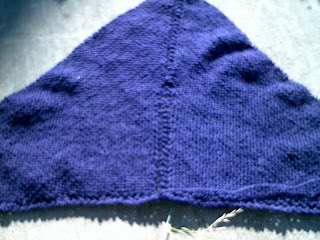 Started: June 8 2011
Yarn used: Bryspun Kid-n-Ewe
Needles: size 7 circulars (takumi interchangeable set) Sharing needles with Ringwood sweater, below
Progress: Less than halfway
Last worked: Sometime in July
Enjoyability: I dropped a stitch a few inches ago and picked it up dreadfully. It looks at me every time I work on it. I hate it. I refuse to frog, but can't stand the mistake. Rows are getting longer...
Prognosis: Will continue; garter stitch is a good knit for tv time. Just need to get the needles back. 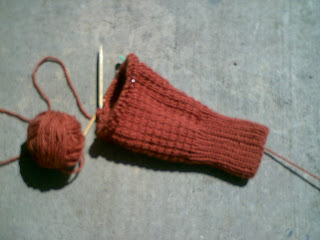 Started: June 28 2011
Yarn used: Knit One Crochet Too Camelino
Needles: #5 and #7 circulars in 36" and 16" (takumi set)
Progress: 70%; almost ready to combine sleeves and body
Last worked: August 2 2011
Enjoyability: So many mistakes with this project i'm upset with it. May end up having to rework the entire body. Scared to find out.
Prognosis: Tentative okay. 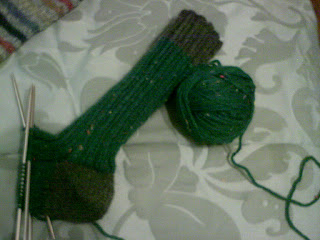 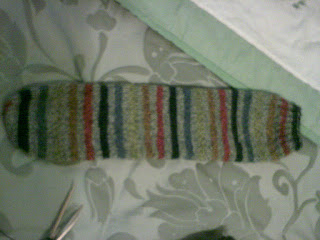 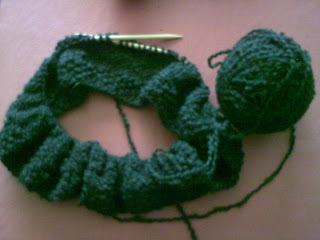 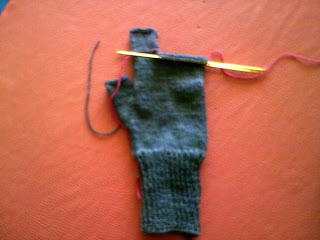 Started: July 27 2011
Yarn used: Inca Sportlace
Needles used: #2 dpns
Progress: Less than 50%
Last worked: August 3 2011
Enjoyability: My fingers come out too small and uncomfortable. Don't enjoy working with so many needles at once.
Prognosis: These may become convertible mittens. 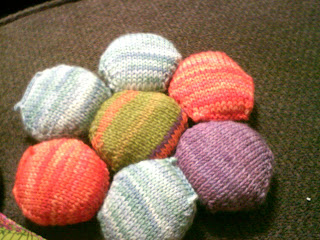 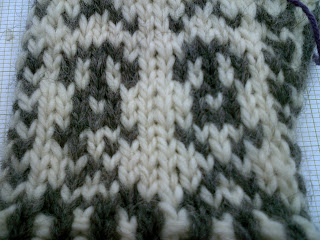 Started: August 5 2011
Yarn used: Cascade Ecological Wool
Needles: size 7 dpns
Progress: 50%
Last worked: August 7 2011
Enjoyability: Fantastic. Fun to make, fun to wear, fun to sniff. Only problem is they're a bit too small so I don't know who they're going to end up with. Also, when I work on them I feel clever that I invented the pattern myself. + bulky yarn equals quick knit
Prognosis: Very good. I wish I'd brought these with me to rescue.

13) The You Know Whats for You Know Who
(Sorry, no pictures or links because it's a SECRET!)
Started: August 12 2011
Yarn used: Valley yarns Huntington
Needles: size 0 & 2 dpns
Progress: 30%
Last worked: August 13 2011
Enjoyability: Well, I kind of finished the fun part. And size 0's are so tiny. It's slow going until I get 50 % done, but this is going to be one of the coolest things in the entire world so I know I'm going to keep up with it.
Prognosis: Damn good.

14) Secret Swap Present
Started: June 24 2011
Yarn used: Red Heart Super Saver
Needles: 5's
Progress 75%
Last worked: June 25 2011
Enjoyability: I'm about to start working with cotton. With an injured wrist?
Prognosis: Must finish by Sept 21, but not sure I'll put it on top of my list. 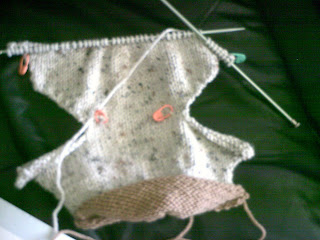 Started: July 20 2011
Yarn used: Red Heart Super Saver
Needles: size 8 metal straights
Progress: 28% (totally pulled that number out of my ass)
Last worked: July 22 2011
Enjoyability: Ow red heart acrylic yarn. But, I know it will be loved forever once I stuff it.
Prognosis: Almost good. Unfortunately I continue to forget it exists so it might end up buried among the wips.
16) Tomten Jacket 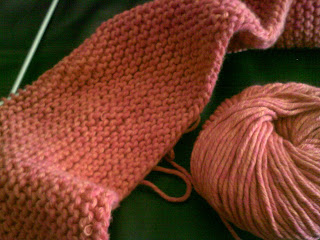 Started: July 18 2011
Yarn used: Rowan Denim Jeans
Needles: #8 metal straights
Progress: 10% ish
Last worked: July 20 2011
Enjoyability: mmmm stupid knitting.
Prognosis: Good. Not fast, for sure, but good. Good thing it's not made for anyone in specific and I'm knitting a pretty big size. Only thing that can go wrong is I lose my original math

17) Top Down Raglan (from a sweater generator) 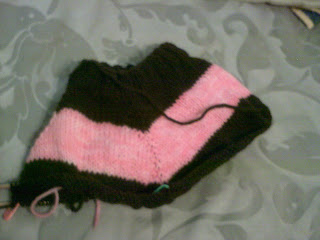 Started: July 19 2011
Yarn used: Wool of the Andes
Needles: #6 24" circ (takumi set)
Progress 15%
Last worked: July 22 2011
Enjoyability: so damn good that I don't want to work on it because i don't want it to end. I love working with my hand dyed yarn.
Prognosis: tentative okay. This is one project i might like more as an imaginary FO than a real one.
18) Hooded Knitted Sweater (doing size 4 for Vyvyan- adding ears)
Sorry no pics yet.
Started: August 15 2011
Yarn used: Lion Brand Homespun
Needles: #9 Straights
Progress: 7%
Last Worked: August 16 2011
Enjoyability: not my favorite yarn to work with, and i should really be using 10.5's instead of 9's. but i am looking forward to seeing the ears on it. unfortunately i'm doing a size 4 and vyvyan wears a size 2. what's with that.
Prognosis: Probably good until I get some good wool in my hands.


Isn't it kind of scary??
If I spend all my time working on these projects, I'll never have a chance to make cute things like Gnome Homes or Fairy Castles, or Bedknobs and Boomsticks, or Hopsalot Bunny Slippers!!!

So, just glancing over the list I see some things that can go or be modified.

1) The hiking scarf. I haven't worked on it in months, and it's not ever going to get any bigger. I can repurpose the yarn for a much simpler scarf for the same recipient.
2) Change the fair isle sweater to a vest.
3) Convertible fingerless gloves: give up on the fingers and make 'em convertible fingerless mittens.
4) H.U.G.? Who wants a huge ugly green blanket anyways? I can donate this yarn and not have to worry about it any more.

Hmmm
17 minus 4
That's still one more than I had two months ago.


Anyways that's where i'm at.
How often do you have to wrangle your wips?
Posted by grandmastatus at 2:36 PM