I took out all my previous swatches out this week and had a look. 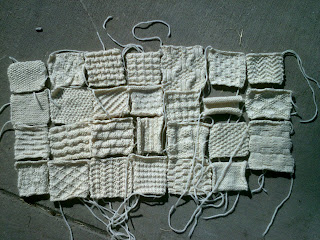 I knew I wanted to block them; quite a few could use a good blockng.
But I wasn't sure if I should weave in the ends or not. I wondered if maybe I could use the ends to sew them up into a blanket.
I decided to leave those questions for later on and just pick out my favorite swatches.
All four of these stitches lay nice and flat, and each of them have interesting texture without being gaudy.

Moving right along, I knit the first swatch of the second section, "Knit and Purl Panels"
These swatches are the perfect detail for the handknit gansey. Some of the patterns (tree of life, marriage lines) are symbolic and traditional while others can be considered space-fillers. This week's challenge included one from each group.

Like in the example photograph, I included both stitch panels on one swatch. In order to keep with the general sizing of previous swatches, I only knitted one width-wise repeat of the tree of life. (The tree of life panel is 17 stitches wide and I have been generally keeping to 20 stitch swatches or thereabouts.) I repeated the tree twice to make up for the squatty length.

As you can see I'm using a brand new (still boring) color for this section, one that I think is synonymous with "Gansey." In fact, when I knit the Dr. Watson sweater, I plan to use this same color. I liked that the book included both the written instructions and the chart for this stitch pattern. I followed the written instructions for the first tree and the chart for the second. This is a big deal for me because I avoid charts like the plague. When I started the chart I thought I was doing really well. Turns out I'm bad at charts in the flat because I have to remember to reverse the knits and purls depending on whether its an odd or even row. I ended up frogging a few rows before I really got the hang of it.
Anyways, tune in for next week's super stitches where i work on:
1) Mock Cables
2) Double Diamond Panel
3) Ridge and Furrow Panel
I already started on the Mock Cables

Posted by grandmastatus at 10:01 AM