But first...
Remember my unblocked swatches?

Well, I blocked them and weaved in the ends so now they look beautiful.

Then I did an amazingly stupid thing and left them outside overnight. When I went out this morning to collect them, I found a bug on one. It wasn't a moth, but still. SCARY! These swatches are quarantined. I'm so terrified they've been moth'd and they're going to live in the freezer for a few weeks. After that I'm probably going to nuke them. Then freeze them one more time. I've heard too many stories to just go bringing them back to my room.

So then, I sucked it up and finally got to work on Will's Stripey Socks. I have left them almost finished for about a month and a half because I was too chicken to work an afterthought heel on them. I took pictures, too, since it was my first afterthought heel and I wanted to show other chickens how easy it actually is.

The first thing you do is determine where your heel is. I was lucky and had another pair of handknit socks in Will's size to measure from, but I just as easily could have just tried it on and marked where the heel should be.
Once you determine where the heel goes (and make sure your sock toe is completely flat, so your heel doesn't end up all crooked) you pick up half of your stitches. 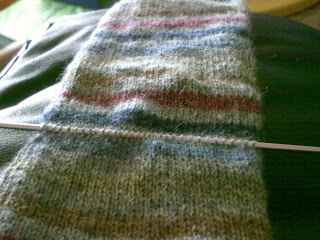 You know how each stitch looks like a "v"? Well I only picked up one leg of each V, same leg every time.
After that, I took out some incredibly dull scissors and cut ONE stitch from the row below the row I just picked up. I recommend sharp scissors for anybody who wants to try this at home. 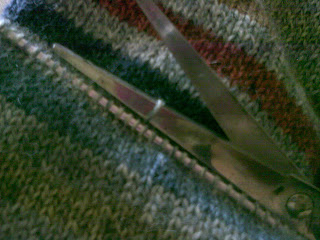 After you cut that stitch you start unraveling in one direction stitch by stitch. Place each stitch on your dpns. For this part it's fine to just have one DPN for the top row of stitches and another for the bottom row of stitches. 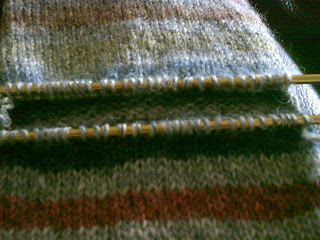 When all your stitches are picked up it should look like this.
I was terrified about this point because I was afraid that the side ends would unravel.
They didn't.
Don't worry.
From there, you just add on your working yarn and start knitting a second toe. 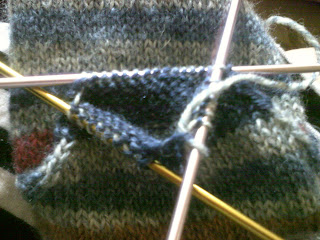 I started off with one plain round, but after trying it on I think I could have done 2 or 3 for a better fit. Preference, I guess.
So then you graft it shut. I guess you could also do a three-needle bind off if you don't mind walking on bumps or don't care for your recipient too much. 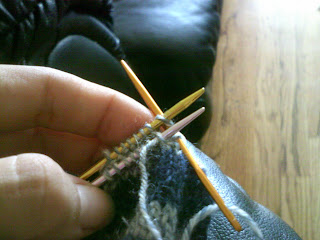 This extra grafting means that for one pair of socks you have to graft not twice but four times. (Seems obvious, but I'm just reminding those people who don't care for kitchner.)

So then, you have your toe-heel. 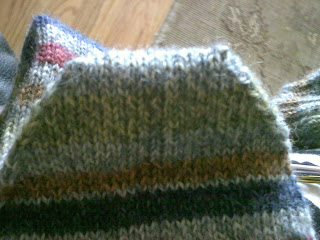 Which looks kind of awkward, but fits just fine.
However, before you go prancing around the house in them, these socks still need some surgery. 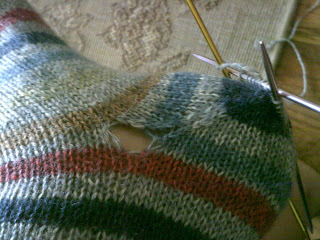 Apparently, this method leaves nice big honkin' holes in the side of your sock. You can fix them while you weave in your ends. 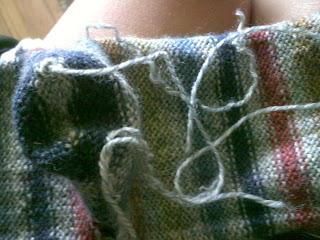 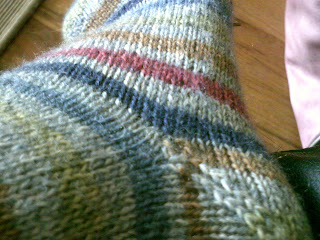 But it tidies up quickly.

Okay! so after that picture heavy tutorial, I'm going to go into what I learned about afterthought heels.
1) Picking up the stitches after cutting takes a longer time than I had expected
2) You must concentrate (at least to some extent) to pick up those stitches
3) Big honkin' holes
4) Lots of ends to weave in
5) Not a sturdy heel- prefer slip stitch flap
6) NOT a good idea with self-striping yarn, unless you want to deal with matching up the ends four times instead of two. (Or if you're like me and don't care if they match or not.)
7) Probably a technique best used when you want to make 2 colored socks and want to knit until all of your main color is gone.
8) You do NOT need waste yarn to do this technique.

To sum it up, this technique was not my favorite. I'm sticking with the flap from here on out. Except for picking up the stitches after the heel turn I can do it no matter where I am. And I think the only place I can't pick up those stitches is in a really dark theater, because I've done it so many times I can almost do it by touch.

But, at least I gave it a try, learned something new, and ended up with a pretty decent pair of socks.
Happy knitting!
Posted by grandmastatus at 12:20 PM