In case you don't remember, I recently acquired 2 balls of Rowan Kidsilk Haze. 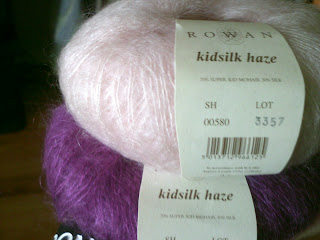 Now, normally I am not the kind of girl who shells out $14.99 for 229 yards. But, it was on sale and I had a free shipping coupon and I knew I wanted to make at least a few of my Beekeeper's Quilt puffs out of kidsilk haze. I ended up getting 2 colors so that I could crank out a pair of white rabbit wrist-ees as well. Now that I have finished those little wristees (really only about the size of a swatch) as well as knit up a few little butterflies, I think I've worked with this enough to give it a proper yarn review.
So first, the facts:
-Manufactured by Rowan Yarns, based in England.
-Name of yarn is Kidsilk Haze (obviously)
- 2 ply lace weight
-229 yards per ball (209 meters)
-25 grams per ball
-70% mohair, 30% silk
The first thing I noticed when I took the yarn out of the package was how light it was. I was surprised when I looked at the label and found that it was only 25 grams. (I admit that I don't use a lot of laceweight, and so I'm used to 229 yards weighing more like 100 grams.)

But I was super excited and busted out my #2's to cast on. 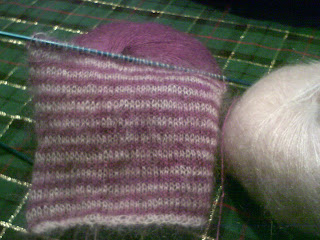 Now you can't tell because I straightened it out before taking the picture, but the first maybe 8 or 10 rows were too tight. It took me a while to get used to the weight and the fuzziness, and the fact that I was working stripes didn't help.
For one thing, the two working strands (as well as the cast-on tail) continued to stick together. I ended up weaving in the cast-on tail very early on to at least get rid of one end. I was carrying the non-working yarn along the left edge as I worked the stripes, and that side ended up being very tight for the first few rows as well, giving a bunched effect. I've never had that problem with any other yarn, but I blame it on my too-tight tension in the beginning. 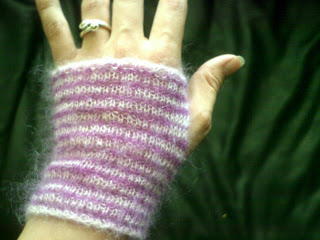 As you can see, this yarn is incredibly fuzzy. It is also very soft, and warm. When I first put on these mitts, I found they were a bit itchy. That scared me for a minute because I expected such expensive yarn to be of utmost quality. Luckily, after a few wearings the itch disappeared. (Though, I admit I don't know if it's just because I lost my sensitivity)

Now, if you are not a knitter or if you are one who has never heard of Kidsilk Haze, I invite you to read the first comment on Ravelry's Kidsilk yarn page. This user literally sings the praises of this yarn. I had heard of this yarn long before purchasing. People have referred to it as "Yarn Crack" or "Heaven" in my presence and so I had some very VERY high expectations. Now to answer the ultimate question: Did Kidsilk Haze meet those expectations?

No.
Not for me. I have discovered during this year that I am not one for fancy schmancy yarns. Artfibers did not impress me and I'll almost always grab the bulky undyed wool when hitting up the yarn shop. Plus there's the unfortunate reality of Mohair.
Now, I've read quite a few books on fibers so I knew before I began that you can't frog mohair. I was expecting that. But as I was working the second or third row on my mitts I decided to tink back to the beginning and discovered that even tinking was a b!*&^ with this yarn.
(Hello, my name is Cecilia and I make a lot of mistakes.)
No it is not impossible to frog this yarn. Supposedly all you need is good lighting, some glasses and a great deal of patience. But I find that I do a lot of frogging and would prefer a yarn that is forgiving in that area.
The whole time I was knitting I had to be pretty focused on what I was doing. (I was working plain stockinette stitch.) If only because the yarn was so fancy that I wanted to be absolutely positive not to mess things up. There was also the fact that the mohair fuzz can cause snagging if you're not careful.
Personally, I'd rather knit recklessly.

On to the seaming...If you're a longtime reader then you know I'm dreadful at sewing. Any kind of sewing at all: backstitch, running stitch, mattress stitch, any kind of stitch. (Except Kitchner stitch but personally I don't count that as sewing, I count it as magic.)
Add bad sewing skills to a fuzzy mohair yarn and..... well.....
I'm definitely knitting my next pair of mitts in the round.

However, the finished product is lovely.

So overall, I guess maybe it is worth it. Though I still think $14.99 is an awful lot...it helps a lot to not think about it.

Final note:
I would reserve this yarn for special occasions.  I think it worked really well as an accent on the catching butterflies, and would like to find more examples of Kidsilk used in this way.
Unfortunately it seems like most knitters are using it for lacy projects full of YO's SSK's and so on. I say unfortunately because 1) a lot of the pattern is lost to the mohair fuzz and 2) if this yarn is difficult to work in simple stockinette I can only imagine the trouble these knitters are putting themselves through.
But then, to each his own.
And if you ever find Kidsilk Haze for sale, buy buy buy. You have to at least give it a try. ;)
Posted by grandmastatus at 8:41 AM