Somehow, even though I told my boyfriend that his sole responsibility during our beach trip was to get a picture of me wearing my sweater, I didn't end up with any pictures of my sweater.
Sorry.
It has a lot to do with me hating people taking pictures of me. But I promise I'll get one up soon.
If all you care about is knitting, feel free to ignore the first half of this post.
We've been going to the same beach every summer for as long as I can remember. But then the last few years we haven't been able to make it. It started when Vincent was born; he would be too young. The next year only half the family went. The next year we couldn't afford the trip, and so on. We did go maybe two or three years ago, but we went in June so it was much too cold for the ocean. Finally, this year we all made it. 16 people altogether, including 4 still in diapers. 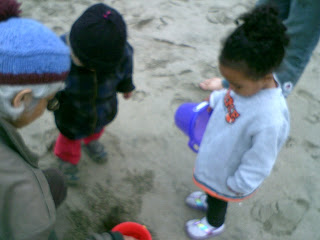 When we first took Vyyan down to the beach, we were shocked to discover that he was afraid of the sand! Then we realized he was also afraid of sound of the waves crashing, as well as the feel of water lapping on his toes.
Luckily, once Grandma came with us the beach was no problem.
Also, don't look at that ugly pom pom hat. I made that years and years ago. But at least my mom likes it... 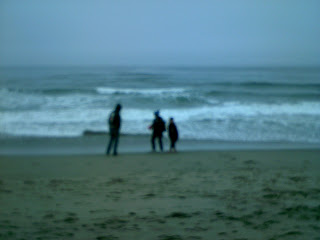 After we beached it up we went back to the camp for a while.
We found lots of seashells, which Vyvyan is convinced are his new toys. 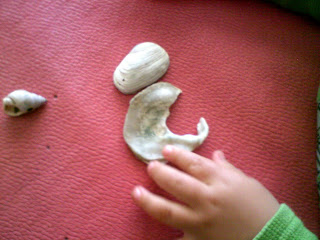 Oh, also he was scared of the tent and cried all night.
He's not good at camping yet, I guess.
By the campfire I worked on something new and exciting... 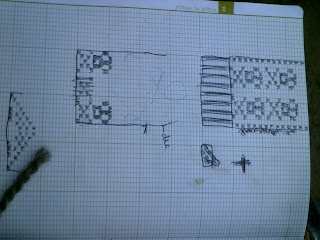 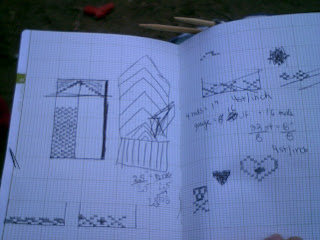 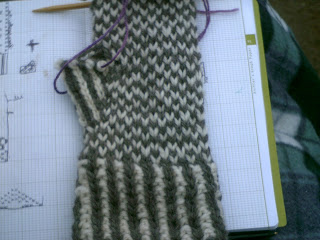 Except for a sizing issue (they're much too tight) they came out very nice indeed. 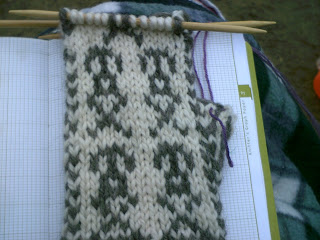 I guess I should have factored in the fact that I was going to be doing a stranded pattern and casted on maybe 36 stitches instead of 32. However, this was my first ever mitten design and I had nothing but my hands to work from and I think they turned out pretty darn well.
Also, if I were working on these at home I would have done the cuffs on 7's and then brought it up to 9's for the body of the mitten. But I didn't bring my 9's with me, so I'll just have to find someone with small hands. Who lives somewhere cold. Who likes skulls and crossbones. And who will wash wool mittens properly.
So if you know anyone who fits the bill, just let me know and I'll knit up the second mitten.
As it is, I think I'm using the first mitten as a gauge swatch for the Very Exciting Skully Yoke Sweater I'll be making one day.
So now we're home.
And I recieved a package in the mail!!!


Then, I made Will try on my Wear the Wild Things Are sweater, so as to prove that it is dreadfully unfitting.

So now I definitely have to frog it, knowing it fits someone 7 inches taller and probably 30 pounds heavier than me. Besides, I'd like all that yarn back.

The End!
Happy knitting ya'll, and I'll be back to my regularly scheduele programming by Sunday. Ya know, since this was supposed to be WIP wednesday, and how i didn't work on my super stitches knitting project and all?? yeah.
Posted by grandmastatus at 1:38 PM