Not quite finished object 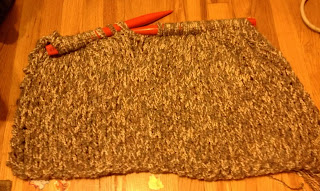 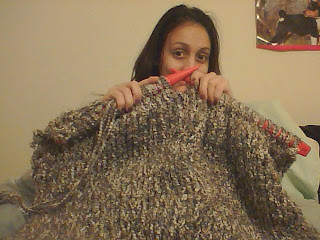 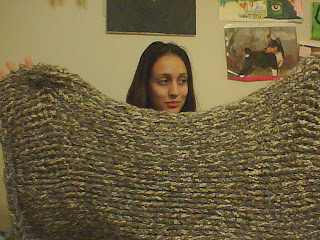 So few years ago, a dear friend gave me an unusual Christmas present: size 50 needles, often referred to as "Speed Stix," which languished unused. Then this year I received a large amount of Lion Brand Homespun- a yarn I can appreciate for its softness and wash-ability but which I find loathsome to knit with. While perusing Ravelry (do I do anything else, really?) I came across a pattern for a "Six Hour Afghan" and was persuaded by my boyfriend to give the Speed Stix a genuine try. (In the past I had made a scarf with the size 50's but that was the only time I had ever used them.)

My afghan is really more  of a lapghan, which is why it took only half the time. In addition to freeing up stash room and offering me almost-instant gratification, this project has also given me a wonderful gift to pass on to a loved one.

My aunt is aging, you see, and aging badly. She suffered a series of strokes last year which left her with dementia that is spiraling downward. It is terrible to see my clever, witty, favorite aunt in such a state of mind. She is almost like a baby. She repeats anything you say, I have seen her try to eat things off the floor, and sometimes she breaks down into tears for no apparent reason... But there is a reason, of course, because she knows that she is no longer able to do things that once came to her easily.

As I said, it is terrible. Her body is frail, too, as she's in her 70's and was a heavy smoker her entire life. Hearing that Auntie has fallen down has become all too familiar to me. Luckily there have been no serious falls, but she has kept the family worried for sure. At this point- though she does occasionally stubbornly refuse- she is confined to her couch or walker and I hope that this lapghan can offer her some comfort. I know that because of her circulation, too, her legs get very cold throughout the day. With each stitch, I hope I offer warmth, and love. A giant ugly hug. 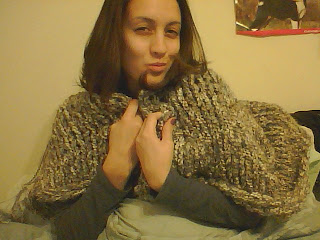 But remember the title of this post. It is a "NOT QUITE FINISHED" object. Reason being I'm not sure if it is the right size. Right now it is sort of a square rather than a rectangle. I bound off mainly because I don't want it to dangle out the edge of her walker or wheelchair and become a tripping hazard. If it needs to be longer I plan on snipping at the lower edge and working downwards from there. I'll need to do that regardless of whether it needs to be lengthened because I cast on MUCH too tightly with those enormous needles. Also, I like the look of the bound off edge much more. So it is definitely not done but hopefully will be done in time for FO Friday... along with a few other surprises.
Posted by grandmastatus at 5:46 AM