Bit of a diversion...

Usually I knit a few swatches on Sunday for my Super Stitches project, but today I just wasn't feeling it. Instead, I cast on for the Owl Mittens I mentioned last time.
At the end of the day I have one mitten to show: 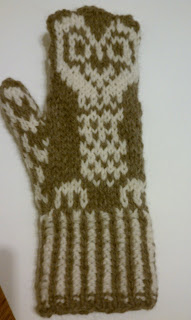 Since the pattern was written for toddlers, I used a bulky yarn and size 9's for the bulk of the knitting. (Cuffs were made on size 7's and the convertible flap was made on 6's because they were close at hand.)
I used Cascade Ecological Wool so they are very cozy and warm, if a teeny bit scratchy. 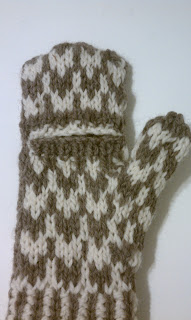 I chose the convertible version for practicality and for ultimate cuteness.
Now that one is done, however, I don't feel like doing it all over again just yet.
So I guess tomorrow it's back on track with the swatches and I can knit the second mitten sometime in the future.
Posted by grandmastatus at 5:43 PM