So at the end of last post, I was under the impression that the best cure for failure is knitting simple garter stitch. It turned out that I was wrong. All these simple projects I have been working on have gotten me into a funk, instead.
Like, the baby sweater? That's just plain stockinette with some increases thrown in.
The giraffe? Same deal. I mean, later on there's going to be a lot of sewing and stuff to keep me on my toes, but that's not the same as knitting that is complicated.
Hexipuffs are so easy I do them on auto-pilot.
The only thing I'm working on that's hard at all is the Fair Isle sweater. (erm. actually I have a fair isle vest on the go, too. but that's hibernating and it doesn't count. shhh.) But, as ya'll know, that sweater is on bulky needles and I only take it out to work on it like once every month.

So maybe, when I need a confidence boost in my knitting I need to work on something a little spicier. 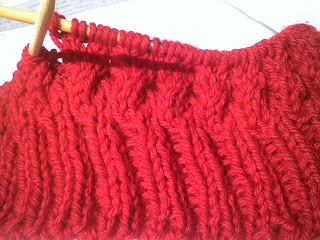 So, I cast on for a tam designed by Ysolda Teague.
So far, even though I'm barely getting to the cables, I've already learned a new technique. I followed a youtube video in the late hours of last night to perfect the tubular cast on.
For a minute there I remembered what it was like to be a brand new knitter. My fingers felt so dumb and clumsy and for a second there I almost ripped it out and did a normal long-tail cast on. I'm glad I didn't, though. Not because of the way the cast on looks (I really don't care less how my hats look) but because of how learning a new thing made me feel.
I feel like I gained a skill point.
Knitting +1
One day I should add up all the knitting skill points I have. haha. Learned long-tail cast on +1. Learned Cable cast on +1, learned to cable +1, learned to cable without a cable needle +1 and so on. And all the techniques I still have to learn... 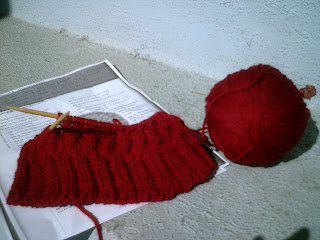 Anyways, I'm really enjoying this new project. I've been avoiding complicated projects because I pretty much stay at home and take care of Vyvyan these days and I'd rather have something simple, but now I think my brain needs a little exercise. When I finish this tam I know I'm going to be very proud of myself, and I think I need some of that feeling right now.
Although, if this ends up a complete failure I guess I'll be right back at step one. But at least I won't be failing simple baby sweaters.

So guess what happened today.
Remember my missing swatch?
Yeah. I lost a DPN inside the couch yesterday and only noticed today. Of course I freaked out because there are babies in this house and who knows what could happen and well, they're my only size 7 DPN's and they're bamboo and old and I've grown attached. So I dig in the couch and what do I find? 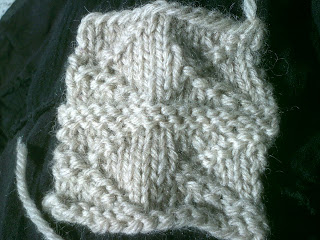 It was just sitting there, minding it's own business like it wasn't HIDING from me the last time I looked. I know I looked in that corner. I looked everywhere. I lifted up the couch. Actually I lifted up all of the couches even though I knew I was only sitting on the one. And I vacuumed! I looked everywhere-even the basket of toys- and that little beastly swatch was hiding in some time and space vortex or something like the Bermuda triange! And now it's back. Now that it is perfectly useless.
Well.
At least I found my DPN. 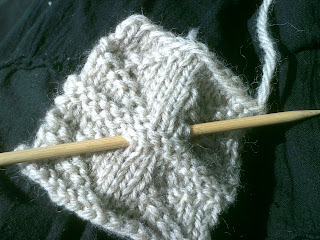 Posted by grandmastatus at 12:21 PM