So last night I finished crocheting and weaving in the ends of my Orange You Glad purse. I'm not going to say it came out great; my crochet skills leave much to be desired. 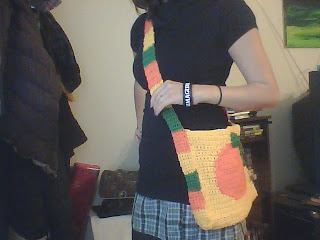 The surface crochet came out a lot worse than I was hoping it would, and my leaves are not exactly leaf-shaped. But, it is done. 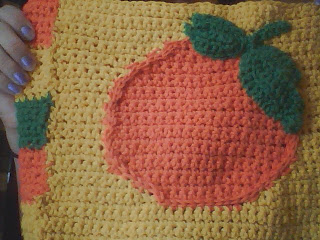 The only mods I made were to make it on a slightly bigger hook so it would turn out bigger (yeah... i did that on purpose. it wasn't a wretched gauge mistake. of course not. why would you even think that?) and to make the straps long enough to wear messenger-style. 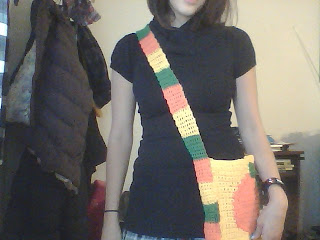 Technically I guess it isn't really done because I kind of want to find a nice citrus-y fabric to line it with. But since that requires shopping (which requires money) it won't happen for a while so it's done for now.
Something like this would be nice:

But maybe with a little more pizazz.
I've been hunting the internet and apparently I'm very specific on what kind of citrus-y fabric I want. Or rather, what one I don't want because I reject every one but can't think of what exactly I want.
Anyways.
My next project I hope to complete is the Giraffe from Itty-Bitty Toys. I'm working on his head now.
What's on your needles?
Posted by grandmastatus at 11:02 AM