She Who Cannot Crochet

I've been crocheting.
Did I ever mention that I can't crochet?
I want to preface this by saying that I really appreciate all the kind comments I have been receiving on my blog. I really enjoy reading them, and each one makes me smile. BUT I would prefer a "no comment" on this particular creation of mine. 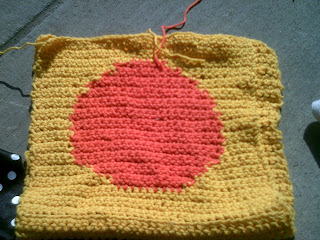 Wow.
It's even worse on a computer screen.
I want to show you what it's supposed to look like. 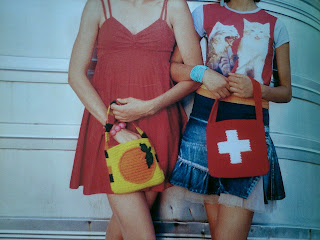 I'm making the Orange You Glad bag from The Happy Hooker, which, as you can see, is supposed to be a small handbag. The thing I am making is the size of my laptop. And I don't have one of those fancy little ones, either. This thing is big. Probably because I didn't check my gauge. Because even though I've had nearly 10 years of knitting experience and have learned almost every gauge lesson there is, I assumed gauge wouldn't matter with crochet. Despite the entire chapter about it at the beginning of the book.

In addition to the sizing issue there is the fact that I apparently haven't figured out yet where exactly the first stitch is supposed to be made. I thought I had the hang of it, I really did. I mean, the bag is just single crochet, and I thought I could do that. Really.

Apparently, when I'm busy changing colors I don't stop to count and make sure I always have the right number of stitches and at the end of the purse I'm missing a few. Or 5.

So that's really discouraging. I'm not even sure I want to crochet the strap and the leaves and stuff. I keep trying to tell myself that once I do the surface crochet along the edges of the circle it will look a lot better but... well... I've never done surface crochet and I'm not convinced.

This project is taking me an extra long time because, well, I just don't like looking at it. I am putting this one in a canvas bag for a while. And I've cast on something new. 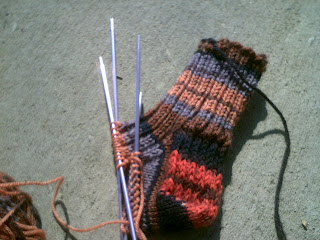 Yes, that is a teeny weeny sock. It's for my son, who turns 16 months old TOMORROW!! Yay!
Posted by grandmastatus at 3:21 PM