Today started out good: I found my bunny slippers.

I'm not going to tell you where they were hiding because it's embarrassing how long they stayed in such an obvious place. I'm sticking with my story that they hopped away and only got back last night.

So then we packed up the baby and went to a little gymnastics place so he could tumble and play. They have a thing on Wednesdays called "Teddy Bear Picnic" which basically means you pay $5 and your kids (under 5) get to play on all the equipment. My mom went in with him while I walked a few stores down and checked out my very favorite bookstore. (The Friends of the Library Bookstore...ahhh such cheap books.)

Mainly he jumped around and danced to the silly music and played with that pony. He could have done that at home without us paying $5, I know, but the padded surroundings really helped my nerves.

Meanwhile, at the bookstore I picked up 6 little board books for him. Boring stuff, like "A Little Spring Shower" and "Country Animals," but I'm positive there is no such thing as a baby having too many books. And I do get bored reading the same ones over and over so it's nice to have some variety. 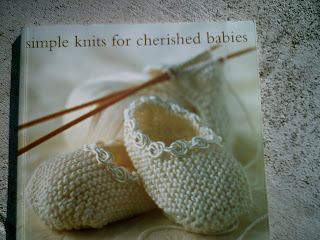 It was $5, which is a lot for that little bookstore, and it's been there the last 2 times I visited and I kept debating it and putting it back, and then finally today I decided to shell out the 5 bucks. After all, my family and friends keep reproducing and the knits in there are really classic. It's ridiculous, though, I don't think a single one of them is in washable yarn. Which is NOT PRACTICAL at all! I mean, what mother wants a cashmere sweater for their pukey baby? Not me.

I grabbed another book I'd been debating, today, too. Not knit-related, but it looks kinda fun and really interesting. It's called "52 projects- Random Acts of Everyday Creativity." Reading off the book jacket for an example of said projects: "Project 42: Send a friend an anonymous package containing a Chinese take-out menu, chopsticks, and $25" 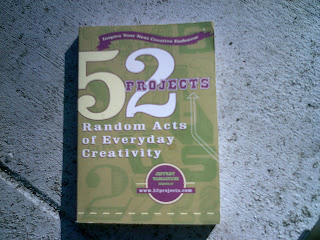 I don't plan on doing each one, and especially not as a once-a-week for a year type deal, but I like the idea of having it around for when I'm bored and feel like doing something fun. Erm. Besides knit....

Then we had to go to the laundrette and dry 2 loads of laundry. Because our dryer is actually, seriously broken now.  I have nothing to say about this other than >_<

Then we got home and I found this in our mailbox!! 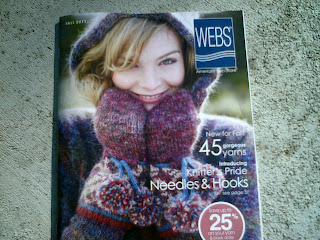 Call me weird, but I love my yarn catalogs. I get so excited when they arrive and I flip through them twice and then absorb them wholly once or twice more, and then I keep them with my stack of old knitting magazines. I never throw them away. (Unless they don't have pictures. What's up with that?) In this one, Webs announced the new Knitter's Pride Needles and Hooks. My favorite set can be found here. It's interchangeable, of course. It's also really pretty.

Lots of cute knit and crochet projects were included in the catalog, too, reminding me that Fall is on it's way. (Even though it was 94 degrees today and we all went swimming at my sister's house and it really feels like Summer.) I especially love the mittens on the front cover, and this plain drop shouldered sweater on page 12. It's knit from Tahki Yarns Melody, but I think I might knit up some of my Wool-Ease and make something like it. You know, some day when I'm not swimming in WIPs.

Speaking of WIPs, I finished a pair of socks today.
You know, I read somewhere a beautiful quote.. something about how your left and right feet have different perspectives and so you don't need identical socks. At any rate, I tried really hard to make them identical twins and, except for the very last row or two, they very nearly are.
Still, they're very cozy. I cast on 60 stitches instead of my usual 64 and they fit me very nicely.

I knit a lot of socks, and most of the time while I'm knitting them I say they're for me, but then by the time I'm done knitting them I don't really care for them anymore and I pack them away for Christmas presents, but these socks? I am keeping these socks.
I now have 4 pairs of handknit socks.
1) The first pair I ever made
2) The ugly worsted boot socks I made that I couldn't bear to give away
3) Some nice thick wool ones that my mom felted on accident
4) These ones

Anyways that brings my WIP count down to 16.
Oh wait.
I cast something new on, too. 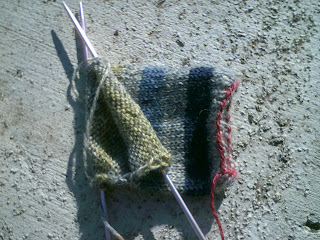 I had no other yarn on me and I still felt like knitting so I went ahead and cast on for a tiny wristee. I'm basically following the pattern for TOK's meow mitts, except without the cute intarsia kitten and with old man cosby stripes instead. Oh, and I'm knitting them in the round because I'm notoriously bad at seaming. Yes, even mattress stitch. Even mattress stitch on stockinette.

So, yes. Now I'm up to 17 WIPs. One day I'd like to bring that down to, maybe, 7?
Five easiest to complete
1) Bunnies (now that they are no long MIA)
2) Legwarmers
3) Mom's Fair Isle vest
4) Big Button Purse
5) Stripey Mitts I just started
Maybe I can get a few of those ones done this month.
Sigh.
It was a good day, in all.

I even dyed a bit of yarn.
That squishy stuff is going to be worked up as a baby sweater, most likely this one.
Why do I love to start new projects rather than finish old ones?
Oh well.


Posted by grandmastatus at 5:48 PM