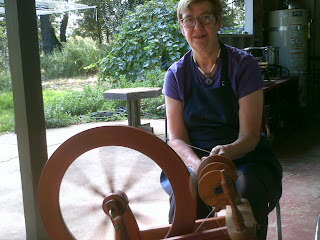 She is a spinner, a weaver and a dyer.
I learned about her through the American River Conservancy, several years ago when she put on a Natural Dyeing class. This was when my mom was working at the ARC, so I was probably around 14 or 15 years old. Which meant that I had just begun knitting and didn't really care about the sheepy parts or the dyeing parts or the spinning parts. I just cared about the yarn, and actually I only used Red Heart and other acrylics at that time, and I really only cared about the finished product. Shame. 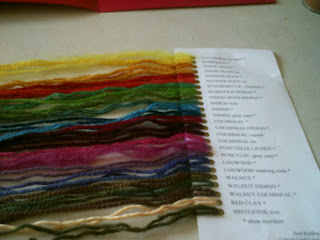 My mom had her sample cards from the first class and as time went on I thought more on how really cool it was that she got to go to that class.
I started to keep my eye out for it again.
When I was working at the ARC, the opportunity arose. Anni was ready to do another class. Unfortunately it was on a Saturday, and I worked on Saturdays. More importantly, it was $65 and I was young enough to consider that a fortune and I wasn't knitting as much in those days anyways.
Finally, Anni did the class again. Because of the cost it was difficult to get people to attend the workshop, but 4 people did end up signing up. Yet, for some unknown reason, I was the only one who actually showed up. Which means I got one-on-one instruction and it was really really cool. I felt like an alchemist's apprentice.
So. Enough of the wordy backstory. Here are all the pictures I took. 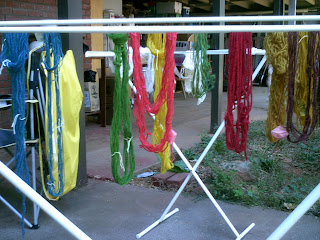 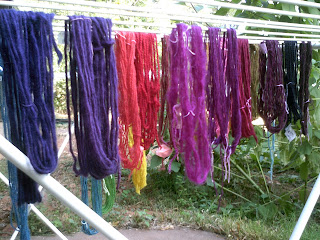 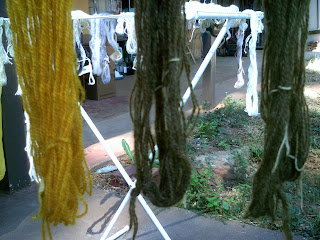 And finally
My very own sample card. 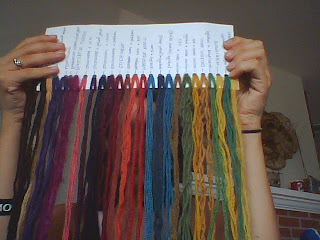 I also received a 10 page packet including recipes, basic information about mordants and safety procedures, and where to find certain dyestuffs and chemicals. I had so much fun, and I learned a lot.
Here is the complete list of dyes we used:
1) Staghorn Lichen
came out bright yellow
2) Marigold
smelled like perfume
came out darker yellow, but still very bright
3) Madder
smelled like medicine
came out very pretty red
4) Logwood
BEAUTIFUL purple
5) Saxon Blue Indigo
this recipe involved sulfuric acid
we used this to dye and to overdye
6) Black Walnut
supposed to come out brown, but ended up greenish, probably because the walnuts were young
7) Cochineal
these insects grow on cacti
they smell really really bad. like dead crickets
and that's before they're cooking
beautiful colors. very red.
8) Onion Skins
smells delicious. like my house ;)
yellows/oranges/browns, depending on mordants
9) Red Clay
did not come out red
comes out sort of light tan instead.
doesn't smell much
but is really sloggy
10) Punctelia Lichen
so beautiful
uses ammonia
takes 10 weeks to prepare the lichen
i didn't even attempt to smell it because of the ammonia

Finally, we had enough time to do an Indigo Dye Vat. Which... I was really disappointed because if only my shrug was dry from it's blocking, I could have brought it along and finished it in the car and then dipped it in the vat and been done with it altogether.

SO anyways
that's what i was up to yesterday. now today? i want to sit back and finish my shrug. And probably watch teletubbies with my son.
this morning we put it on (for the first time ever) and he saw them pop out of their little holes and his jaw dropped and his pacifier fell out and rolled away. it was so adorable. :)

Posted by grandmastatus at 10:35 AM