I thought I would incorporate all three panels into one swatch, just like it was done in the book. I figured that would give me experience for when I ever knit an aran sweater. 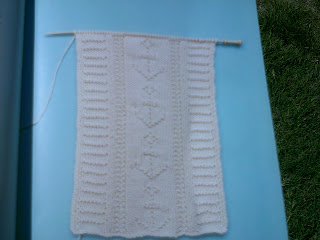 But then when I looked more closely at the book and counted stitches for the cast on, I realized I would have to have a 43 stitch swatch. So, instead I broke it up into two simple swatches.

SWATCH 1: Ladder Panel
This swatch had a very simple 4 row repeat.  I found it impossible to lose my place and didn't look at the directions after the first repeat.
I was surprised to find that I liked this swatch very much. (Actually, it kind of reminds me of my Bedknobs and Broomsticks cowl.) As you can see, I worked two horizontal repeats right next to each other, but I think it would look much better with another panel in between, like in the book.

SWATCH 2: Steps Panel and Anchor Motif
Because the steps panel is a repeat of 5 stitches, I incorporated it into the anchor swatch as a type of selvedge stitch.
I actually liked the reverse side of the steps panel far more than the front side. From the back it looks a bit like the Andalusian stitch of weeks ago.
Now the Anchor panel was disappointing.
Can you see the anchor?
Yeah. Me neither.
The anchor is a 22 row repeat. It was moderately easy to keep track of what row I was on. I did have to frog this once because I lost my place. It wasn't a terrible knit, it was just a terrible result. Whether it was the yarn I used, the color, the gauge or something else entirely I don't know but the anchor is really not showing up. Seriously. This is not a matter of my camera doing weird things; in real life it's just as obscure.
So that was really disappointing, like I said.

BUT, thinking about it did lead me to do some research on Aran sweaters and the anchor in specific and I found an interesting article on the blog The Wool Shop. She discusses a few of the meanings of various motifs (not the anchor, unfortunately- but I read on another page that the anchor was a more recent contribution to the aran sweater by Alice Starmore) and it was a nice little article. The common legend about lost fishermen being identified by their sweaters was included, although it is unfortunately false. (That misconception came from a play where a man was lost at sea and his sister identified his body by the socks he was wearing. She had made them herself and had dropped a stitch, which she recognized.)
Anyway, if you are at all interested, the short article can be found here
There is another fascinating, lengthier, article I read a few years ago that you may find interesting: How a Dropped Stitch Gave Rise to a Popular Myth that is just full of wonderful Aran history.

Thanks for reading, and for all your wonderful comments. It makes me so happy to know I'm not just talking to myself.

Posted by grandmastatus at 11:52 AM