Remember how I said I got the body done? Well, I went ahead and knit two of the legs as well. 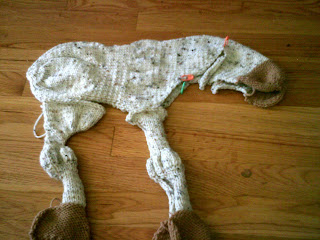 I did a hind leg and a foreleg, so you can get the gist of how he's going to look when he's all sewn up and stuffed. Now, I was pretty scared of working that hind leg. I remembered it being pretty tough on my hands the last time I made a pony from this pattern.
This time, however, I glanced over that part of the pattern and saw some purl-front-backs's. I thought, "Oh, I was a less experienced knitter then. Those pfb's must have scared me, but they're really not that bad, I can do pfb's in my sleep!"
Pride goeth before a fall.
The problem is not the pfb's. The problem is that for 11 consecutive rows, all the kfbs and pfbs stack up on top of each other making each progressive row a little bit tighter and a little bit more painful. I tried to focus on making each set of kfbs and pfbs as loose as possible, but they still came out really really tight and difficult to work. It would have been fine and absolutely painless if there were a single row among those 11 that was NOT an increase row. No luck. It was really painful. My wrists hurt from twisting the needles, and my thumb and forefingers hurt from pushing the needle through really tight kfb loops.
I know it would be a lot less painful if I had chosen a yarn with some elasticity. Next time I make a pony (and there WILL be a next time) I'm using a wool or wool-blend.

So I'm not really looking forward to doing that second hind leg. Also not looking forward to seaming the whole thing up and putting on the mane, tail, eyes, and nostrils. I'm terrible at finishing things. Remember how I found my bunny slipper? Poor things are still faceless.

Now on to my book review!!
I bought this book years ago at Borders. I actually bought it strictly for the horse pattern. I fell in love with his cute floppy self instantly, and I still love him. I probably bought it the year it came out, 2006, and worked up a cute white horse for my niece's 9th or 10th birthday. I never made anything else from it until the horse I'm working on now, but not because I don't like the patterns. I actually lost the book for a few years because I was moving a lot back then and it was packed away in some box. When I found it in the garage last year I was so happy! Why?
Because it is a fantastic book! Here's how it works. There are two basic patterns in the beginning. The basic doll pattern (boy and girl) and the basic horse pattern. The book then delves into different categories: Enchanted Land, Fairy Dream, Wild Trail, Set to Sea, and Magic Waterworld.
Each one of these categories includes patterns that spark from those basic doll or horse patterns in the beginning, as well as accessories.
In Enchanted Land the basic girl doll becomes a princess, wearing a puff-sleeved dress. A pattern is included for an embroidered castle, as well.
In Fairy Dream, the doll takes on the role of a fairy, and you can knit her a flower to sleep in and a unicorn to ride on.
Wild Trail includes a cowboy doll complete with gun holster and cowboy hat, and his very own mustang. There is also a crochet blanket for the horse's back, to go under the sewn saddle.
Set to Sea is where you can find a pirate and his rat, as well as a dinghy to set sail in.
And in Magic Waterworld that basic doll becomes a mermaid, and you can knit her a dolphin friend and tiny creatures like sea horses, fish and crabs.

There are quite a few patterns in this book, and the sample projects are so cute! What's really great about it is that it's not just knitting. Claire Garland really shows what embroidery and decorations can add to a knitted project. She includes templates in the back so you can cut out felt pieces for the eyes, for the cowboy's hat and holster, for the horses saddle, etc.
Each one of the designs is full of charm. One interesting design feature is that all the dolls have spaghetti arms and legs. They're just 6 stiches in stockinette knitted to about 9 inches long. They kind of remind me of Tim Burton's drawings, because they're all long and spindly.

The dolls are very easily customizable for whatever the kid in your life (or kid in your heart) wants! In fact, ever since I bought it I've been thinking of transforming the princess doll into a creepy goth-type doll wearing black and white stripes. Or Sally from Nightmare before Christmas. She'd be easy to make from this pattern, too, because after you make the basic doll you can just sew her patchwork dress with cloth.

Anyways, I guess that's not really a review so much as a summary of what you'll find in the book. But I just wanted to talk about it a bit since it was lost for so long and now that I've found it and am working from it again, I am re-discovering its awesomeness. I can't wait to knit the dolphin!! It's so big and cute and floppy and happy!

This is a great book for people with lots of kids in their lives, or for anyone who likes to make toys. The little sea creature patterns at the end are so small; they're just perfect for last minute stocking stuffers.

SO that's it. That's what I'm working on. I want to finish knitting that pony by the end of the week so I'd better get back to it.
Posted by grandmastatus at 12:50 PM