You know those little tubes that are filled with tiny plastic toy animals? My son has one filled with dinosaurs, but it's kind of hard to get the little guys in and out of the tube. Hence, my newest project: a drawstring bag to contain all his little toys.
I'm using Paton's Grace, which is quite shiny and is very nice to work with. 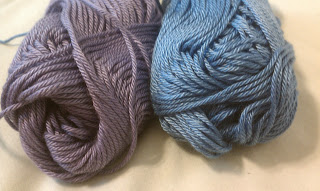 I'm crocheting this little bag (using a size 00 crochet hook), partly to give my wrist a break from knitting but mostly because I think single crochet makes a nice and sturdy bag. Also, a part of me may feel that crochet is more manly than knitting which doesn't actually make sense nor does it matter since the person I am making it for is 2 and doesn't care about masculinity.
I crocheted a little circle and stopped increasing when it got big enough to fit most of the dinos. Now it's just crocheting around and around forever, I guess, which got boring pretty fast. I added purple so that at least the stripes would spice it up a little bit. 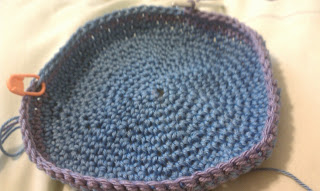 Every time I decide to crochet something instead of knit it, I get all offended that it's not done in like a half an hour. I swear, once I read that crochet is faster I just expect instant gratification. Even if I'm using a tiny hook, or I'm making something big!

So that's what I'm working on at the moment...the pookie is done, but I'll share that tomorrow ^_^
For now Vyvyan's dinosaurs are waiting in their plastic prison for their new fancy crocheted home...

Since I'm already off on the dinosaur tangent, what's your favorite dinosaur? Mine is the Dimetrodon, even though I guess he's technically more a lizard than dinosaur. ^_^
Posted by grandmastatus at 3:02 PM