Ah, hats.
Good morning, everyone. I'm in a rush today, blogging in the 15 or so minutes before I have to run out and catch a bus. Normally I would be spending quality time with my son, since I have to be gone all day, but today he decided to sleep in. (No complaints here, though I may get a wee bit weepy by lunchtime.)
So I decided to take a quick snapshot of some hats I've been working on during my lunch breaks. 1,2 3, go! 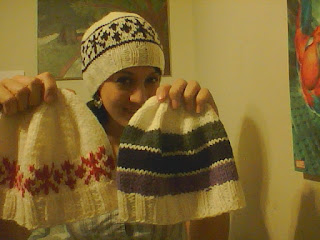 Knitted in all Patons classic wool (my favorite good plain wool) these little beauties just pop right off the needles. Did I ever mention how much I love knitting hats? Did you ever look around and notice just how many different sized heads there are?
And what about the different personalities? I could make a neon green hat with ugly purple shamrocks on it, and it would be right up somebody's alley. And on top of all that, my favorite bit about hats is that you only have to make one of them. One single hat. No worries about matching the decreases or stripes on a second hat. (Although I am tempted to make some mittens to match the purple striped hat up there.)
In other knitting news, when I get off of "work" (it's actually more like a  temp agency, but at least it's something.) I have a nice big sit-down project to work on. You won't even believe it. I'm not going to delve further into this secret project until I get far enough along to reveal some telling photographs, but it's pretty awesome. And this other project I've been working on IS the kind of thing where you have to make two match. So there's a wee hint for you.
All right.
Off to the bus now.
Today's hat is brown with some pink patterning, and it's the same yarn on size 6's so it should turn out child-sized.... Maybe everyone in my family's getting hats for xmas. ;)

Posted by grandmastatus at 7:12 AM