I have uploaded to Ravelry as a PDF, but for those (like me) who like patterns to be available online.....
PATTERN UPDATED: 1/12/14 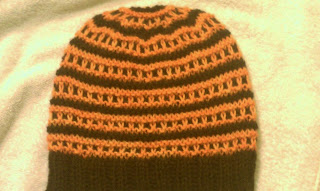 This hat is great for when you want some easy circular knitting, but don't feel like working plain stockinette. The slip stitch pattern looks more complicated than it actually is, and is great for those who new to colorwork. The stripes are only 2 rows each, so you can carry the yarn and avoid weaving in ends. Charted and written instructions are included.

Windowpane Pattern: worked over an even number of sts.
Note: Always slip purlwise, with yarn in back

Block your hat to really bring out the stitch pattern. ♥
Feel free to contact me on Ravelry, username: grandmastatus
Posted by grandmastatus at 11:20 AM

Email ThisBlogThis!Share to TwitterShare to FacebookShare to Pinterest
Labels: design