So maybe I had to force it on his head.Maybe in order to show off the cabling I had to pretend there was something amazing outside. 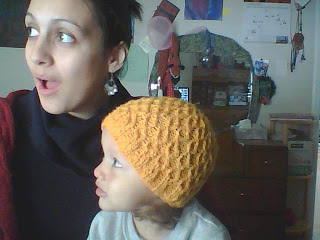 But danggit, the hat is finished and it fits him great.

I guess after he saw the pictures he decided he liked it because he started putting it on by himself. 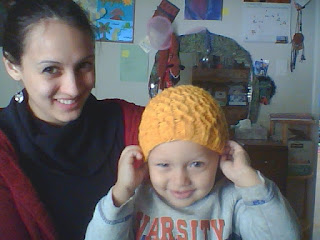 And since it is yellow he is actually a fan of it, and was very happy to shout out "Yellow hat!" throughout the whole photo shoot. (The color is the reason I didn't make this hat for myself. The yellow makes me look sort of like a zombie.)

Pattern: Koolhas
Yarn: Artfibers Yurt from my San Francisco trip last year. It's sort of a weird yarn because the strands are littered with little felted beads. But it is very soft, probably because there is a bit of alpaca mixed in, and it shows the texture surprisingly well. The only bad thing is that it smells sort of vinegar-y.
Mods: CO 80 sts, still did 4 repeats before crown shaping.
It's quite stretchy so it should fit him for a while.

Posted by grandmastatus at 11:50 AM