Hello again! Today I've got two projects I'm equally enamored with, so I'm going to be working on both of them.
One is the Ski Sweater: 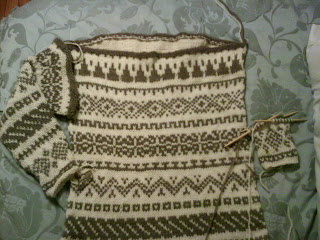 Because it is bulky weight yarn and the patterns are so fun, this is a very speedy knit. After I finish the second sleeve, I'm going to pick up and knit all the hems (in red!). After that it will probably go into hibernation for as long as it takes to figure out how to sew a straight line with that sewing machine I don't have....
So I'm hoping to get a few more sleeve patterns in today.

The other thing I want to work on is the scarf I started yesterday. 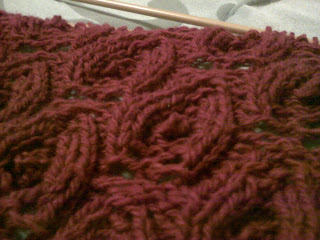 I found the video for this stitch pattern here and immediately wrote down the pattern and cast on. I really like it because it's reversible. The WS rows are relaxing, though, because you just knit the knits and purl the purls.
Still, because of its lacy nature, I'm probably only going to work on it when Vyvyan sleeps. (IF Vyvyan sleeps; the last few days he's refused to nap.) 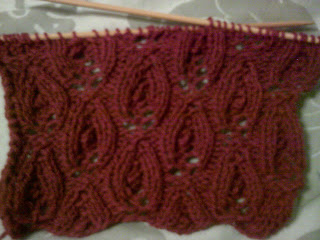 I'm also going to be avoiding casting on Tiny Owl Knits' new pattern, which I bought immediately and have sworn not to cast on until after the Ski Sweater is done.
That's it for me, this week.
Click here for more WIP Wednesday posts.
Posted by grandmastatus at 7:54 AM