I'm not sure if I ever mentioned it on the blog, but I have been on a yarn diet. It started when Mooncalf announced that she wasn't buying yarn until Christmas. I thought, hey I can do that too.

Well, turns out I couldn't. My lovely bf brought me to my LYS and... well there must be something wrong with me or something because I can't just visit the LYS and not buy yarn. I tried to just buy a magazine, or a darning needle, or a sweater shaver, but I couldn't not buy yarn! Something about how we should support local businesses. Maybe because since I moved to Stockton I saw 3 yarn shops close and I don't want it to happen anywhere else again, ever. (But if that were the case would I buy so much of my yarn online?) I don't know.

Anyways, I decided to pick out a super soft yarn so I could knit my son a hat that he would actually wear. I rummaged in the sale bin and found a nice ball of Rowan Cashsoft DK in white for a few dollars off. It was perfect: soft, squishy, on sale, and a yarn I've always wanted to try. But I decided to make a striped hat and so I bought one at regular price as well, in a nice grey.

From the second I put the two yarns next to eachother, I knew exactly what kind of hat I wanted. I love when you know exactly what the yarn is going to be. So often I find myself buying yarn just because it's beautiful or because it's cheap or because I can always use a ball of Cascade 220.

So, when I got home, the hunt on Ravelry began but there was no hat like the one in my head! So I just made it up as I went along, and you know what?
It's perfect.
It has quite a bit of stretch and I think he's going to be able to wear it for a really long time. Like, while I was knitting it I was afraid it was going to be monstrous, because it fit on my head!
But in the end it came out great. 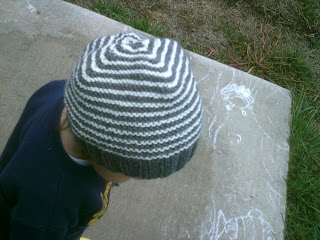 I'm hoping I can find a little felt train at Michaels or something. He's much more likely to wear something if there's a train on it. I was thinking I could sew it on right above one of the ears of something so it's kind of off to the side.

With the leftovers I made another little hat, in about size 6-12 months. It's the same except that I used white for the ribbing instead of grey and I used size 3 needles throughout and for Vyvyan's I used 6's.
I'm going to sew a little felt heart onto this one, but I'm not sure who exactly it's for yet.

Oh, and while I'm here I might as well mention the yarn.
I loved it! I loved squishing it in the ball, I love squishing it in the hat, and I loved knitting with it. However, in one of the balls (the one I bought at full price, too) there were more than 4 knots! I was so upset. I kept having to untie them and join them in and then weave them in at the end. It was really frustrating especially because I thought Rowan was supposed to be sort of classy. Nevertheless, I will probably buy again. But only for hats and other accessories; I hear it pills quite a bit, and it's way too expensive to make a garment with.

Oh well. These little hats were a lot of fun! I'm glad I broke my yarn diet. Especially because now that both hats are done, there is very little evidence. ;)
Posted by grandmastatus at 12:46 PM