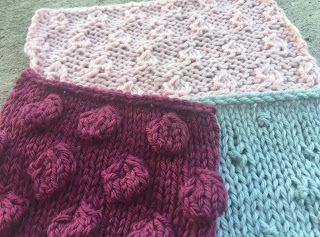 Today's swatches were from the Ornamental Stitches section of Super Stitches Knitting.
They are the Bobble stitch, Popcorn stitch and the Hazelnut stitch.
I really thought I was going to hate the bobble, like the popcorn, and love the hazelnut. But actually I was surprised to find that I hated popcorn, liked the hazelnut, and loved the bobble! 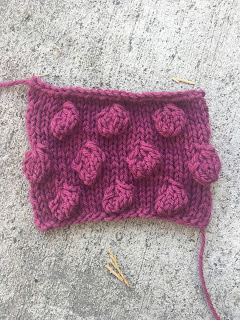 Here is the bobble swatch. Made by knitting into the front and back of the same stitch twice and then worked back onto itself for a few rows, each bobble takes up a bit of extra yarn and time. I've always hated bobbles because the few times I've worked them I ended up having to knit 6 or 7 stitches together, which is a pain. This pattern has you lift the stitches over the first which is a lot easier. I can't think actually of a practical use for bobbles(which is probably why they are in the ornamental section), but I do like how this swatch turned out. It was a 12 row repeat and it was mostly stockinette, so the pattern was easy to work. 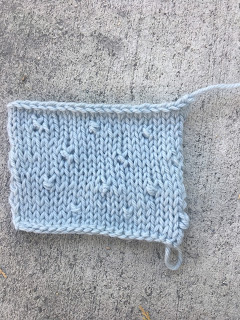 The popcorn stitch was an 8 row repeat, and the "popcorns" are made by working (K1,P1,K1) all into one stitch. Which, I found odd to be working a purl one in the middle. I feel like it should have specified under which leg of the stitch to actually insert your needle while doing that purl one. Either way I tried both ways and it didn't look pretty either way. This pattern just looks like mistakes to me because the popcorns seemed to want to poke their way into the reverse side of the fabric.
Here is a photo of the back. 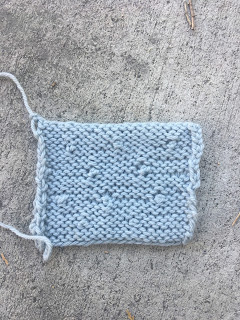 I don't really think the effect is worth the effort for this stitch.

It reminds me of a little peter cottontail. Anyway this stitch was interesting to work because there's a P3tog which I find curious because I would probably prefer to do a k3tog. But it was easy, and it's a 12 row pattern with a couple stockinette rows to keep your mind happy. I did notice that since it was worked on reverse stockinette where you actually purl all those stitches, this swatch was very loose and large. (My fault- I am a loose purler.) I'm not a huge fan of purling in general so I doubt this stitch will be used again. It would look nice as an allover pattern for a sweater though, as in Andi's sweater. Here is the reverse side. 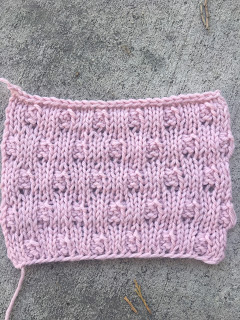 Three fun swatches.
Next week is the Daisy Stitch, Bell Motif, and Embossed Leaf Motif.
Posted by grandmastatus at 5:30 PM