FO Friday: Must Have Cardigan

This finished object has been a long time coming. And by a long time, I mean I favorited this pattern in Ravelry in July of 2012 and I'm pretty sure I bought the pattern booklet a year before I found it on Ravelry. I found the Patons design booklet, "Street Smart" for 50 cents at a local used bookstore and immediately was drawn to the Must Have Cardigan. Originally styled on a girl with a boyish pixie who sported a newsboy cap and rode a bike, it spoke to my inner active tomboy. I thought was much too short on the model- I think the pattern at its largest calls for 12" before the armhole- but that was an easy remedy. But also the V-neck was far too deep, and my chest gets cold. Of course I could alter the pattern.... but, I would brush the cardigan aside, and choose a different project each and every time.

Finally, my husband and I planned a weeklong road trip, and I needed a project to work on. I didn't have anything big and complex, and we would be driving long stretches of Utah and Nevada. So we went to Michaels and I picked up some Red Heart Soft. Good for my budget, and good for throwing in the washer if the baby throws up on it. This was 10/08/2016. Over a year later and the baby doesn't throw up as often! But acrylic was still a good easy care choice for now, although part of me sure wanted the properties of wool when I was blocking it! 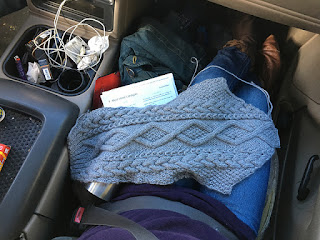 Two sleeves and part of the back later and we were back home. There was Christmas knitting to do, and the Must Have Cardigan got put away. The active WIP got put into a bag, and went into deep hibernation. I started and finished sweaters, for myself and the kids. Hats flew off the needles, and shawls. Occasionally, though, I'd take it out and work a few rows or pattern repeats. And I'd always end by laying all my completed pieces out and imagining the final garment. And looking at the photo of the girl riding her bike, which I had doodled on to lengthen the sweater and change the neckline. I'd be flooded with mixed emotions: one was longing for the beautiful sweater of my dreams, two was dread for sewing the dang thing together (I always feel that way when I work a sweater in pieces, but doubly so with the seed stitch edges I was knitting), and three was the niggling emotion of fear. Fear? Who could fear knitting? I think of the Yarn Harlot saying to fear skydiving, not knitting! 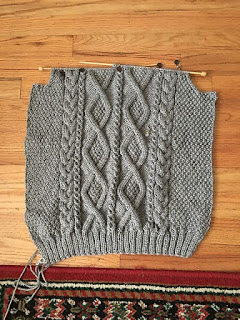 Still, I recognized the fear. I was scared that I wouldn't be able to change the neckline. That something would go horribly wrong. That it would turn out awful and I wouldn't know until after everything was sewn together and then in order to rip and reknit I would have to unpick it and I wouldn't and it would just sit there unwearable and unworn for probably two more years before I finally mustered up the gumption to finish it.

I pressed on, dutifully keeping track of my changes for the left side so that I could mimic them on the right. I ended up making mistakes, of course, and carefully took note for these "fudge rows" so the fronts would end on the same pattern row. Of course I finished knitting the sweater at a time when I was absolutely too broke to buy any new craft supplies, so the buttons are a close match from the jar,  I found myself without a long enough US 6 needle, and ended up using a shorter one to do one half of the buttonband at a time. In May of this year I finally started getting to know how to use a sewing machine and so part of me wanted to try the new Eloflex thread to sew the sleeves in and purchase a walking foot too to make the process easier. 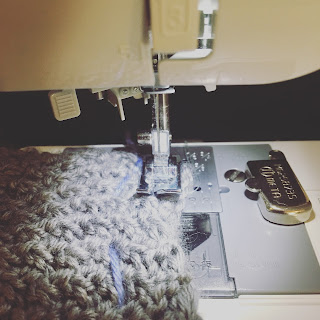 I ended up sewing them in without either, using plain cotton thread and the regular machine foot. It came out rather well, and was much quicker than sewing in the sleeves by hand. The side seams I did using mattress stitch, which was much easier on the double seed stitch than I ever could have imagined, and soon the sweater was done! I did have some trouble "blocking" the buttonband, since I would usually have ironed it to keep it nice and flat and iron would melt the acrylic, but I steamed it instead and it turned out fine. 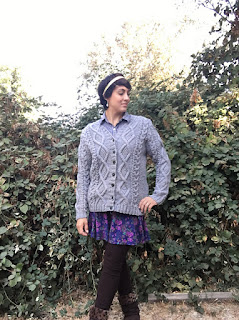 I have gotten several compliments on it already, and it's been so nice to wear in the mornings. I live in California so it still gets pretty hot later in the day, but owning this sweater actually makes me look forward to it getting colder. 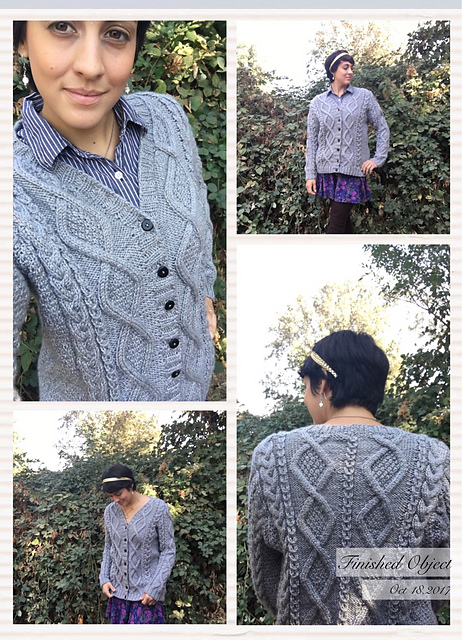 I added three inches of length, shortened the neckline by starting it about half a pattern repeat later than where the pattern dictated, but other than that i just followed the pattern for a size Large.
I am going to be wearing this sucker a lot. They call it the Must Have Cardigan for good reason.
In fact, I'm wearing it right now, plus a shawl. 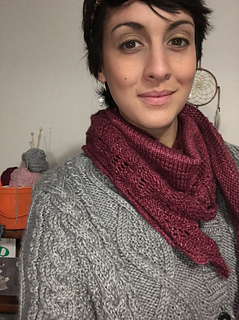 p.s. I'll be putting up my swatches for Super Stitches Knitting in the next day or two. Finishing this sweater took priority for me this week.

Posted by grandmastatus at 6:11 AM